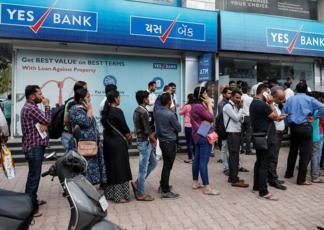 Yes Bank has become the latest financial institution to go under. Although the bank was in trouble for a long time and the promoter Rana Kapoor had been removed from the board, all efforts to find a buyer for the bank had been scuttled, some at the very last minute. People in the know say that Kapoor was pulling the strings from London and was instrumental in changing the minds of suitors. They say that he was still nursing the hope that the government would allow him back on the saddle of "his baby", as he calls the bank.

The government, it seems, played on his hopes and lured him back to India. Maybe the way the government handled the Yes Bank issue it managed to nab Kapoor and will punish him for the alleged wrongdoings, but in the process, it has penalized lakhs of ordinary customers of the bank. The moratorium of withdrawals up to Rs 50000 a month is a stiff penalty for the customers of an upmarket bank like the Yes Bank, many of whom had issued EMI cheques worth much more than that every month from their accounts in the bank and had substantial deposits that are now frozen. It has also brought the operations of the digital wallet PhonePe (which was entirely dependent on Yes Bank for its transactions) to a standstill, inconveniencing crores of users and discrediting the UPI network, of which PhonePe controlled a major share.

The culprit, in this case, is the RBI. Despite having known that Yes Bank was on the verge of collapse, the regulator just removed Kapoor two years ago and put its nominee on the bank's board in May last year. That was nearly ten months ago.  But after that, despite having access to all papers and analyses, the RBI did little else apart from trying to find a buyer for the bank. The result of that is now the government will have to bail it out with the SBI taking the lead. In any case, the RBI and the government must not delay whatever they have planned as each passing day is eroding investor confidence and adding to the troubles of the bank's depositors.