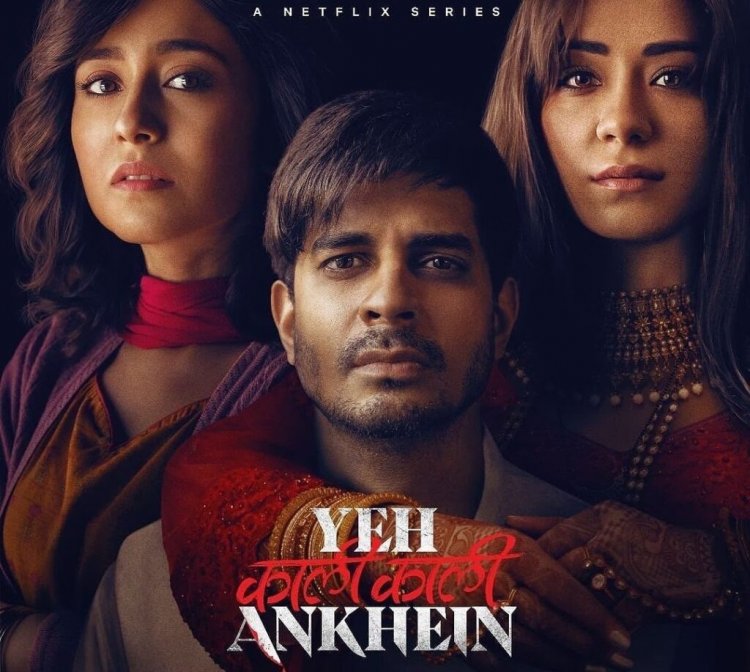 Yeh Kaali Kaali Ankhein (streaming on Netflix) has an interesting story. A simple young man with middle-class dreams is pursued by the daughter of a rich, powerful and devious politician. She will go to any lengths to make him his own. It could have made for a very different and engrossing tale. Yet, the execution sometimes lets it down by resorting to scenarios that have been played out in previous shows and by emphasis on violence rather than relationships. But overall, it manages to keep the viewer interested and hooked.

The story is about Vikrant (Tahir Raj Bhasin), Purva (Anchal Singh) and Shikha (Sweta Tripathi). Vikrant and Purva are in the same school and when Purva sees him for the first time as a 10-year-old, it is love at first sight. But Vikrant refuses her offer for friendship after which Purva goes to boarding school and later abroad, for studies. In the meantime, Vikrant becomes an engineer and falls in love with Shikha with whom he shares the dream of having a house and a family away from the place where they stay.

But his father, who is an accountant with Purva's father Akheraj Awasthi (Saurabh Shukla), the typical heartland goon-politician who does not think before killing an SP, wants his engineer son to work for Akheraj. Meanwhile, Purva has also come back and still yearns for Vikrant. When Vikrant refuses the job offer from Akheraj and Purva, his family is subjected to all kinds of harassment and threats and he sees the cruel acts of Akheraj and his nephew Dharmesh (Surya Sharma). He is left with no option but to join.

Later, Purva proposes marriage and when he refuses, they go after Shikha and it is believed that she dies after a cut-up body (with the ring Vikrant gave her still on the finger) surfaces near the dam. Vikrant once again has no option but to marry her. But Shikha is alive and returns to Vikrant's friend Golden (Anant Joshi). That is the turning point in Vikrant's life as he turns desperate to reclaim his love and his life.

In doing so, Vikrant becomes like the goons. He surfs the dark web, finds out a senior in college who has connections and hires a killer (Arunoday Singh) to kill Purva and those who go after Shikha. Does he succeed in getting his simple life back? That, obviously has been left to season two, with this part ending at an interesting stage to keep viewer interest at its peak.

The show is marked by good performances from all actors. Tahir Raj Bhasin is excellent as Vikrant, a simple boy who is pushed so hard that he resorts to desperate measures. Anchal Singh plays the villainous temptress with aplomb. But Sweta Tripathi seems to be getting into a rut despite her obvious and enormous talent. Saurabh Shukla as the goon-politician is perfect. Brijendra Kala as Vikrant's father is good. Surya Sharma and Anant Joshi also play their parts well.