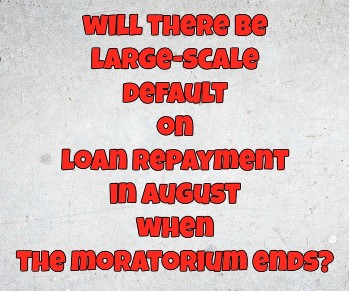 With Little Income, How Will Loans Be Repaid After The Moratorium Ends?

With Little Income, How Will Loans Be Repaid After The Moratorium Ends?

Will banks face great financial distress once the moratorium on loan repayment (along with interest due) ends in August (assuming the period is not extended)? All signs in the market point to that. For, the moratorium was granted on the premise that the economy will recover in five months and people will start earning as before to repay the amount. But the government did not make concurrent efforts to revive the economy (apart from the Rs 20 lakh crore economic package, whose utility is in serious doubt). Hence, for most people, individuals as well as businesses, the situation remains as it was five months ago. In some cases, it is even worse than before. There simply is no money in their hands to pay EMIs, let alone the aggregated back dues of six months.

Let me provide an example. A friend was running a fleet of vehicles through a popular taxi-hailing app. Despite the unlocking of the nation, business is not even 10 percent of what it was when things became bad in March. Most drivers have gone to their native places. The ones who were present took out the cabs but the amount spent on fuel was more than the returns. He has now stopped running the fleet completely and is in the process of selling the vehicles in order to pay back the loans. He knows that business is not going to improve any time soon. To add insult to injury, despite opting for the moratorium, the banks have regularly tried to encash his EMI mandate and his banks have been debiting return charges in his account. Most probably, they will also inform the rating agencies of the 'default', spoiling his creditworthiness and make it difficult for him to obtain loans in the future. There is little hope left for him.

This is just one example. Across the nation, small businesses are bearing the brunt of the disruption and most are going under. It is not much different for big business. The tea industry has still not got payment from buyers for goods sold in October/November last year. The complete lockdown had meant that they were unable to tend to the bushes for three months and most wilted during that period and gardens began to resemble jungles. When they were allowed to resume operations and started pruning and weed control operations, continuous rains in Assam in the whole of July have held them back. With the production this year not expected to be even 25 percent of last year, how is the industry going to pay back loans?

The government has got to think about this problem and come up with a solution. First of all, it has to extend the moratorium for another three months and at reasonable rates of overdue interest. For instance, credit card holders are being asked to pay 3.45 percent compounded interest per month on dues from March. This is adding to the stress. One knows that it is the stated interest rate for default on credit card dues. But that is for normal times. These are not normal times and a revision is in order. A rate of 2 percent would be perfect to provide relief to credit card holders as well as compensate the banks. Further, the government must invest heavily in infrastructure to put money in the hands of the people so that they can pay back the loans. Leaving it to God, or the Covid vaccine, is not going to help matters. No one is asking for doles or subsidies. But in the absence of income (which can only come when businesses are up and running as before and that can only happen if the government intervenes to make investments), there is every likelihood of businesses and individuals defaulting of loan repayments in a big way.