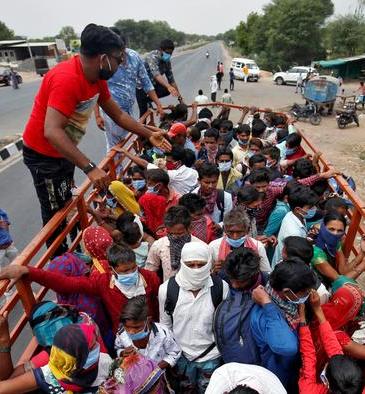 Will The Exiting Migrant Workers Return?

Will The Exiting Migrant Workers Return?

The country is currently witnessing an exodus of migrants from job-providing states like Maharashtra, Karnataka, Telangana, Gujarat, Punjab and Haryana to UP, Bihar and West Bengal, where they mainly come from. Will these workers return after things become normal? That is a question to which there are no easy answers.

People migrate from their hometowns or villages or even cities in search of work or greener pastures. If that is the main reason for such a movement of labour, then it is obvious that these workers will return. If they are disgusted with the treatment meted out to them in the wake of the Covid-19 crisis, maybe they will not return to the state from where they are now exiting, but might go to a different state. But lack of work or lower wages in their home districts is likely to make them return to any other state, if not immediately then in the very near future.

The calculation is simple. A construction worker in Kolkata, employed with a Metro railway contractor, gets wages of Rs 350 per day on an average (which is even more in cities like Mumbai and Bengaluru), with an average of 26 days of work in a month or 312 days in a year. If that worker decides to stay home, his best fallback would be MNREGA where he will get only between Rs 168 to Rs 281 (depending o the state) per day and a guarantee of only 100 days of work in a year. But since that is provided to one adult member from each household, there will normally be no guarantee of work. Although the Centre has allocated extra funding of Rs 40000 crore for MNREGA and most states have indicated that they will provide work for returning migrants, one feels that the wage differential and the earning potential in the full year and the fact that there are several odd jobs which the migrants do in their free time to earn more in cities and industrial townships will sooner or later force them to turn migrants again.

Further, most state governments were struggling to provide work under MNREGA, sometimes resorting to pointless work just to shore up the figures. How then will they find work for this sea of migrants, that too in times like this when the economy is struggling and government funding for projects is hard to come by? Hence, one feels that if and when the Covid-19 crisis dies down (it could be one year from now or even longer), or even before that, the migrants will return to other states to look for work that pays much more and keeps them employed longer than MNREGA.