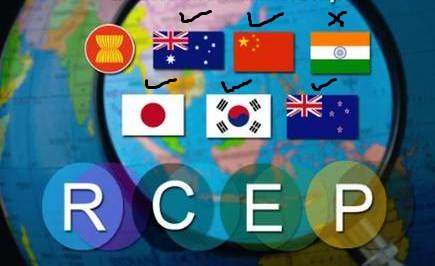 Why India Refused To Join RCEP

Why India Refused To Join RCEP

Ignoring suggestions by several experts that a free trade zone and increased trade between Asean nations and Japan, South Korea and Australia will be beneficial for the Indian economy, Prime Minister Modi did not agree for India to be a member of the Regional Comprehensive Economic Partnership (RCEP), which could have been the largest trading block in the world, in Bangkok.

Modi told the gathering that "Our farmers, traders, professionals and industries have stakes in such decisions. Equally important are the workers and consumers, who make India a huge market and the third biggest economy in terms of purchasing power parity. When I measure the RCEP Agreement with respect to the interests of all Indians, I do not get a positive answer. Therefore, neither the Talisman of Gandhiji nor my own conscience permits me to join the RCEP".

India was chiefly concerned about cheap Chinese agricultural, industrial and dairy products flooding the country to the detriment of the Indian industry if a free trade agreement was signed. India has been very watchful and has been forcefully raising the issue of tariffs and access to markets vis-a-vis cheap Chinese goods of dubious quality.

Apart from the fear of Chinese goods flooding the markets, India was also piqued that its concern regarding moving of base year from 2014 to a year closer to the signing of the deal to reflect the latest duty structure was not addressed by the group. Equally important was the issue of transshipment of Chinese goods from other nations, issues of non-tariff barriers and commitments on the services sector. Then, there was no in-built safeguard to prevent import surge.

In the absence of these safeguards and commitments, Indian fears are valid. The Chinese are adept at identifying products that are needed in other countries and they set up huge factories to churn out these products at prices that no one can match, without any regard for quality. Further, given its landmass, China can flood the Indian market with agricultural and dairy products and worsen the farm distress in the country. The government has taken a wise decision by not joining RCEP since concerns raised by India were not addressed. The Agreement in its present form would have been harmful to all sectors in India.