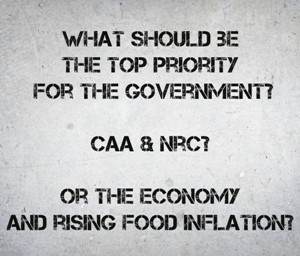 Why Arouse Passions Over CAA & NRC When It Is The Economy That Demands Immediate And Serious Attention?

Why Arouse Passions Over CAA & NRC When It Is The Economy That Demands Immediate And Serious Attention?

The government has listed all it has done till now to revive the economy that is showing increasing signs of a recessionary trend. It has said that it has:

1.       Cleared the bulk of Central government dues to suppliers, along with the dues of 32 large PSUs

2.       Accelerated capital expenditure as proposed in the budget

3.       Cleared the bulk of dues on credits in the GST account of assesses

5.       Increased flow of funds from PS banks to customers as well as NBFCs who in turn lend to end-users

6.       Made good progress in bill discounting for the MSME sector

7.       Created mechanisms to shield honest decision making by bank officers so that they are not hounded by the vigilance department or the CBI

8.       Eased access to foreign borrowings by the corporate sector

10.   Raised FDI limits as well as simplified and eased them

12.   Amended the IBC to insulate the new management from penal action due to the misdeeds of the previous managements

13.   Raised the threshold for a creditor to invoke bankruptcy

While these are excellent measures and have contributed in a large way to put money in the system, obviously they are not bringing in the desired results and certainly not at the desired speed. Money has to be pumped in as the present downturn in the economy is largely due to a steep fall in demand for goods and services. All sectors, led by infrastructure (cement, steel and other building materials) and automobile have reported falling sales month after month (though auto sales picked up in October due to the festival season). Factories have reported negative growth in manufacturing for two successive quarters now.

This means that if the government is serious about reviving the economy it has to do more. It has to expedite sale of Air India, BPCL and other PSUs. It has to invest the funds in infrastructure projects to give a push to the cement and steel sectors. The downstream effect will be immediate and cascading. The government must also seriously look at reviving the PPP scheme and also the build-operate-transfer mechanism to undertake big projects that it has not been able to start due to the unavailability of funds. Entrepreneurs have the funds but are not investing due to the lack of quality projects and the general damp mood. But if the government proposes big infra projects and partners with the private sector, money, one thinks, will not be a problem.

Then, the government must also think of floating foreign bonds, at least up to 20% of its total borrowing. Foreign sovereign bonds are not risky or incapacitating if they are done with care and in moderation. The government must also raise the limit of foreign portfolio investors investing in government treasury bills from 20 to 30 percent. It should also think of allowing foreign companies and individual investors to invest in such securities. This will allow foreign capital to move in as well as leave local funds for local borrowers, making it less competitive for them to borrow funds.