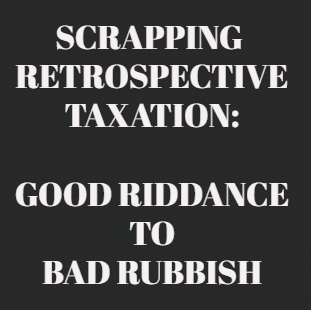 The government today took a huge step in making India an investor-friendly destination. It tabled a Bill, Taxation Laws (Amendment) Bill, 2021 in the Lok Sabha that seeks to undo the damage of retrospective tax on indirect transfer of Indian assets that was introduced in the Finance Bill, 2012. It has also decided that it will refund the amount already collected under this retrospective tax, without interest, from companies like Cairns and Vodafone, if certain conditions are fulfilled by these companies. The government has also decided to reimburse legal costs, again without interest. The main conditions are that the companies will have to withdraw all litigations already filed and give an undertaking for not filing any new case on this matter and also furnish an undertaking that after the settlement under the proposed new law, they will not claim any costs, damages, interest etc. on this account.

It is good that the government has taken this step. It is wrong to change the goalposts in the middle of a game. When it is done by the government, it shows that it is trying to take unfair advantage from a done deal and is definitely tax 'terrorism'. It goes against ease of doing business. If laws are not transparent, prone to frequent changes and done with a desire to tax a deal with retrospective effect, they make a country an unfriendly investment destination. The NDA government, despite being painted as pro-rich and business friendly, continued to make the same mistake which the UPA government did by originally introducing the retro tax. It did not heed the arbitration awards in various international courts and sought to contest them, eroding further investor confidence. It also led to the ugly situation where Cairns got orders in its favour to seize Indian assets abroad to get refund.

The decision will come as a huge relief for the embattled Telecom major Vodafone-Idea which is hugely stressed and on the verge of closure if things do not work out soon. K M Birla has written to the government to buy his stake and has already stepped down from the board. It will also probably mean that Cairns will now withdraw the various cases it has filed against the GoI and settle the matter as per the new law. Both the government and the companies should now show flexibility and work things out smoothly. The government must also ensure that no such grossly unfair law is planned or introduced in future.