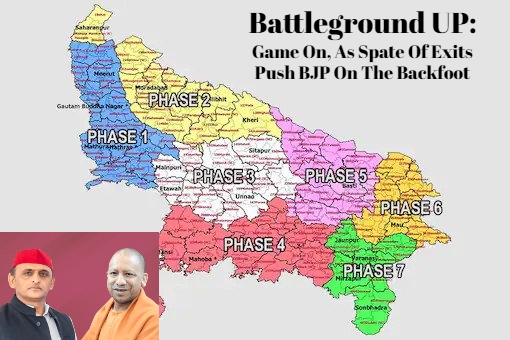 UP: BJP On The Backfoot As Exodus Continues

UP: BJP On The Backfoot As Exodus Continues

The exodus is gaining pace in UP. On Thursday, one more minister and two more MLAs left the BJP for supposedly greener pastures. In the morning, Mukesh Verma, BJP MLA from Shikohabad (Firozabad), quit from primary membership of the party. A couple of hours later, MLA Vinay Shakya also resigned.  "Swami Prasad Maurya is our leader. We will support whatever decision he takes. Many other leaders will join us in the coming days," Shakya said. Even as the party was absorbing this, Dharam Singh Saini, junior minister in the Yogi cabinet, announced his resignation and left the party. This takes the three-day total to 9 till now showing that it is becoming a major crisis for the BJP ahead of the polls. Most of those who have quit are likely to join the Samajvadi Party (SP).

Although the BJP has not reacted till now (except for a tweet from UP deputy CM Keshav Prasad Maurya asking rebels to reconsider their decisions) and is going about its business calmly (top leaders of the BJP Central Election Committee met physically and through video conferencing in Delhi today to finalize candidates for the UP assembly polls), it is obvious that the party is rattled by the spate of exits in these last three days. The party's famous and labouriously crafted social engineering experiment is being torn to pieces and it is not able to stop it.

It is also extremely surprising that a party as tightly managed as the BJP did not get a whiff of what the OBC leaders had in mind. The party had, in the last reshuffle of the Union cabinet, hugely increased OBC and backward class representation with a large number of inductees from UP. But it seems that was not enough to quell the discontent of these OBC leaders who felt stifled by Yogi Adityanath's style of functioning and his indifference towards them and the constituency they represent. Their anger can be gauged from the statement of S P Maurya who is boasting that he will finish the BJP.

While that may turn out to be an empty boast as all indicators point to a very close fight between the BJP and the SP, it is now clear that the BJP is no longer the frontrunner. Akhilesh Yadav has turned the game on its head by quietly crafting social engineering of his own by assembling a huge number of micro and small outfits that represent various caste and communities across UP on the SP platform. Their support will give SP a definite edge in close contests. The best thing is that Yadav has done all this without a political strategist at his beck and call. It will take all the charisma of Narendra Modi, the guile of Amit Shah and the 'upyogita' of Yogi Adityanath to fight both anti-incumbency and a resurgent SP and make the BJP win.