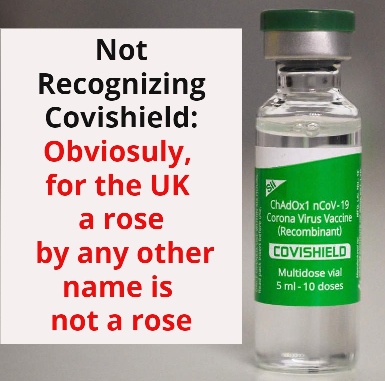 UK's Decision Not To Recognize Covishield Is Illogical And Discriminatory

UK's Decision Not To Recognize Covishield Is Illogical And Discriminatory

Considering the health implications for the citizens of its nation during the pandemic, every country has the right to impose travel restrictions on people from other countries. But these restrictions need to be transparent, fair and equitable without any bias. But the restrictions imposed by UK on travelers from India (among other countries) have rightly been termed as bizarre and racist by most observers in India.

For one, the new UK rules amazingly and illogically refuse to recognize those who have received two doses of Covishield, the Covid vaccine developed by Oxford-Astra Zeneca and widely used in the UK, manufactured under contract in India by the Serum Institute, as fully vaccinated. Since the same vaccine is being used in the UK, the logic of not recognizing the Indian version just because it is marketed under a different brand name is incomprehensible.

One can understand not recognizing the other locally-developed vaccines as they are yet to receive WHO certification, but since the Oxford-Astra Zeneca vaccine is approved and used in the UK, not recognizing its Indian version does smack of racism. Does the British government mean to say that the same product manufactured in British or factories of other nations is acceptable but manufactured in India is not? Or is it that the composition of the same vaccine made in UK is superior to that being made in India?

The non-acceptance of the fully vaccinated status of those Indians who have taken both the doses of Covishield will mean that they will have to get a Covid negative report three days before landing in the UK and test again after two days of arrival. But since no Indian vaccine is approved for them to be treated as fully vaccinated, all Indians have to quarantine on arrival at home or in the place where they are staying; take a test on or before day 2 of arrival with another test on or after day 8. If the traveller tests positive for Covid-19, he or she and the household must quarantine for 10 days from the day of the test. If a 'variant of concern' is found in the samples, all their contacts too will be asked to take a test.

This is clearly a biased rule and the UK must take it back. It must approve Covishield for Indians as it will cause harassment to travelers from India although they have been jabbed with the same vaccine as the people of the UK. The Indian government has rightly called it discriminatory and warned of "reciprocal measures". The UK has said that it is willing to resolve the issue by negotiating with India. The earlier it is done is better.