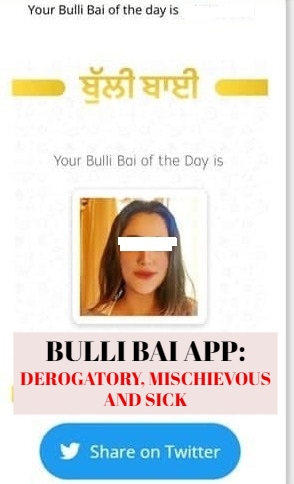 Those Behind Apps Like Bulli Bai Must Be Caught And Punished

Those Behind Apps Like Bulli Bai Must Be Caught And Punished

It is obvious that those who created the Sulli Deals website last year and those who created the Bulli Bai website/app now are educated and technically-proficient persons or are being helped by such persons. One says this because not many common people know about GitHub, let alone hosting a site on the platform. Hence, this again is a case of educated minds with sick mentality. In a bid to create confusion, the website uses Khalsa motifs and the twitter handle @bullibai, which spews venom against Muslim women, is claimed to be operated by 'Khalsa Sikh Force'.

Hosting a site with a derogatory title and then filling it up with content against Muslim women, mainly those who are famous or active on social media, that is abusive and derogatory can only be the handiwork of a biased and sick mind or minds. The term Bulli is used exclusively for Muslim women and in a derogatory manner, much like k**wa or k*t** is used for Muslim men.

The Delhi police have filed an FIR against unknown persons after a journalist filed a complaint that her pictures have been modified in "an improper, unacceptable and clearly lewd context" and put up on the said website along with derogatory remarks. After Shiv Sena's Priyanka Chaturvedi flagged the site to Mumbai Police and IT minister Ashwini Vaishnaw, the minister replied to say that GitHub had taken down the site and blocked the user and Computer Emergency Response Team (CERT), along with the police, was probing the matter.

But nothing is likely to come out of the current probe as no concrete action has been taken till now on the FIRs lodged in connection with the Sulli Deals website. This kind of selective action, or inaction, is against the interest of the nation. The government must act sternly against these cyber bullies. They must not be allowed to spread this menace from faceless and unverified accounts. Technology must be put to use to identify them, catch them and punish them as per the law of the land.