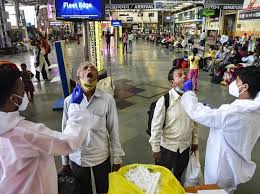 Third Wave: A False Sense Of Complacency Will Lead To Future Problems

Third Wave: A False Sense Of Complacency Will Lead To Future Problems

Is the third wave Covid curve bending in India? Are fresh cases really showing a downturn? For the last few days, fresh cases in Maharashtra, Mumbai, Delhi and Bengal are either declining or the growth rate has slowed down. But this is not really the case. It is mainly due to lower testing. India reported 235456 new cases on Monday, down 9 percent from Sunday when 2.59 lakh cases were reported. But Monday's low cases were against the lowest (only 13.13 lakh) tests conducted in 13 days. Yet, the positivity rate at 18 percent was the highest during the current wave. This means that if India had carried out 20 lakh tests on Monday, which it should given the high positivity rate, the number of cases would have been close to 360000.

Then, the ICMR fiat that asymptomatic persons and also asymptomatic contacts of a Covid-infected person need not be tested is also suppressing the figures for new cases. Add to this the practice of many, at least in urban areas, to self test with home testing kit and without reporting the result to the authorities and the picture is not very pretty. On a conservative estimate, the number of fresh cases in India is at least double of what is being reported. In several cities like Kolkata, the positivity rate is still anywhere between 35 and 55 percent and that is very alarming. Nowhere in India is the positivity rate below 5% and that is a sure indication that the curve is not bending.

There must be a clear policy on the number of tests to be done every day, state-wise, district-wise and city-wise as per the positivity rate. This data should then be assembled and analyzed as without that, it is very difficult to know the spread and severity of the third wave. All experts had predicted that Omicron will spread very fast and infect a huge number of people. The peak was to be reached in the first week of February. But India has reported figures that do not bear this out. So how should India formulate policy on tackling the spread? A false sense of complacency due to the low figures being reported will lead to wrong policies and lingering health problems for the people.