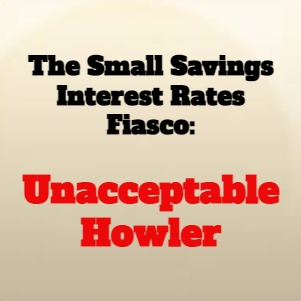 In what can be considered as one of the biggest howlers (it cannot be considered a rollback as the government has admitted that it happened by 'oversight') of the NDA government, the Centre withdrew its notification slashing the interest rates on small savings schemes within a day of notifying the same. The government said that the notification was issued through 'oversight'. It is difficult to understand that how such an important notification, the decision on which could be taken only after a series of high-level meetings in the finance ministry and which can only be issued after being vetted by several high ranking officials, could be issued by 'oversight'.

That the notification was drafted clearly shows that meetings must have taken place to decide about slashing the interest rates. It also proves that the government had decided to slash the rates after such meetings. The only thing is that someone in the ministry jumped the gun and issued the notification at an inappropriate time when elections are being held in five key states. There is no doubt that the notification will be issued again, sooner or later. It has been withdrawn now only not to spoil BJP's prospects in the ongoing elections in the states.

But the incident shows the government in very poor light. It must conduct an internal inquiry to find out how this could happen. Today it is a notification about slashing interest rates that got issued by 'oversight', tomorrow it could be some other, more vital, notification that can be issued likewise. The government needs to reexamine the chain of command that is responsible for such decisions and exercise better control over it. Obviously, there are shortcomings in the system and they need to be addressed at the earliest. Care should be taken to ensure that such a blunder does not happen again.