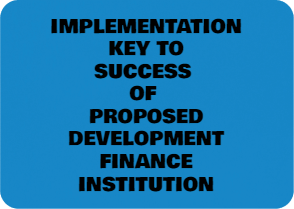 Finance Minister Nirmala Sitharaman has announced in the Budget 2021 that the government will set up a separate development finance institution (DFI) to push the projects under the National Infrastructure Pipeline (NIP). Sitharaman had announced that the DFI will have an initial capital of Rs 20000 crore and the target is for it to achieve a lending portfolio of Rs 5 lakh crore in three years time. While this is a good move that will make infrastructure investments more focused and dealt with by a single institution, the previous record of the government in implementing the move properly does not inspire much confidence.

India's experimentation with DFIs is not new. In the past, ICICI and IDBI were created but both were later converted into universal banks. As of now, the India Infrastructure Finance Company Limited (IIFCL) exists but plays a very limited role. In fact, financial services secretary Debasish Panda has said that since IIFCL has some domain expertise and trained manpower, it can be considered for a quick start and may be subsumed in the new entity. That will also be a good move.

But the government needs to conduct the implementation part differently. All previous DFIs did not relly take off because the focus was lost. If the new DFI has to succeed, the there should be clear guidelines about its functioning. Also, the government has to be clear about how the new DFI will raise funds to finance the long gestation infra projects. A vibrant bonds market is necessary for it to access long term and low cost funds to finance such projects. If all things fall in place, such a DFI will play a huge role in the successful implementation of projects under the NIP. Hence, the government needs to learn from past mistakes and ensure that the new institution adopts best practices and is given a clear mandate. It should also be manned by professionals bankers and other trained personnel and bureaucrats must have little say in its operations.