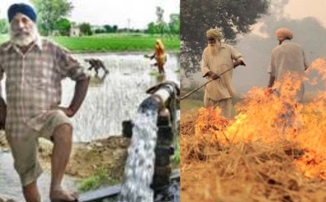 The agitating farmers, predominantly from Punjab, must realize that negotiating about anything is not a one-way street. Both parties on the table have to understand the matter at hand and solve the differences in a spirit of give and take. But the farmers have adopted an inflexible stand from the beginning - they will not settle at anything other than a repeal of all three new laws.

The farmers, especially from Punjab, must also realize that the whole country knows how pampered and well-off they are. Despite getting millions of rupees as power and fertilizer subsidy, they still produce paddy in a water-deprived state just to avail of the MSP, in the process playing havoc with the groundwater level in the state and burning stubbles to heavily pollute the air in order to get the land ready for early sowing of wheat. They have resisted all attempts to make them move to growing other crops.

The figures speak for themselves. Only 6 percent of Indian farmers benefit from MSP. Of those who grow paddy, only 12 percent benefit. The state-wise difference is starker. While 95 percent paddy growers benefit from MSP in Punjab, only 3.6 percent do so in UP. Since the APMC procurement system works well in Punjab, the farmers from that state are most agitated over the new laws which they say are designed to benefit corporate interests. But is it really so? There are enough checks in the new laws (and more can be incorporated through negotiations) to let the farmers do the producing while the corporate sector does the processing and value addition, in a win-win situation for both.

The government, while arriving at some sort of a guarantee to let MSP remain for wheat and paddy and relenting on some other things that are troubling the farmers, must remain firm about the new laws. The farm sector needs to be reformed and open and unrestricted marketing through additional channels, reduction of load on government to procure and store grains that are often wasted and introduction of advanced technology and investment in agriculture by the corporate sector will take the sector to new heights. India needs another Green Revolution that is entirely different from the one that happened in the 1960s. That was for food security. This one is needed to make India the world leader in processing agriculture and dairy products.