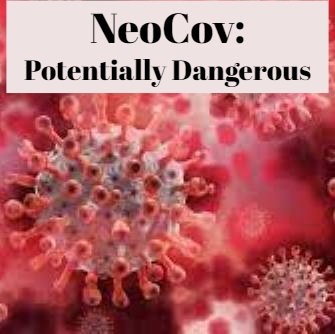 The NeoCov Warning: More Possible Shocks In The Offing For Humans

The NeoCov Warning: More Possible Shocks In The Offing For Humans

In a yet-to-be-peer reviewed study published in BioRxiv, Chinese researchers from Wuhan have flagged a new coronavirus which they have detected in bats in South Africa. Named NeoCov, the new virus is said to be closely related to the Middle-East respiratory syndrome (MERS), a viral disease that was first identified in Saudi Arabia in 2012. They also said that although in its current form NeoCov is unlikely to infect humans but it can mutate and any of those mutations can potentially infect humans. They said that "NeoCov and its close relative PDF-2180-CoV can efficiently use some types of bat Angiotesin-converting enzyme 2 (ACE2) and, less favourably, human ACE2 for entry". But what is alarming is that Chinese scientists found that if NeoCov begins to infect humans, it will have a very high transmission rate and the mortality rate will be close to 33% (0ne in three infected persons might die). Moreover, they also found that NeoCov could not be neutralized by antibodies that target the Covid virus.

Although not confirmed yet, these are disturbing findings and prove that the world is in for more shocks. The World Health Organization (WHO) said that it was aware of the developments but the virus requires further study to find out if it poses a risk to humans. WHO said that the source of more than three-fourths of infectious disease in humans was wild animals, and it was working actively to tackle such zoonotic viruses.

Though these are early days to predict how NeoCov will affect humans, the early warning by Chinese scientists gives the world time to devise effective strategies for the situation when, and if, a mutation of NeoCov starts infecting humans. The possible high rate of infection and mortality pose a huge risk of overwhelming health infrastructure and harming economies worldwide. Governments around the world must prepare to deal with such an eventuality. Prime Minister Modi had recently warned that states must be prepared for new variants of coronavirus and must not let their guard down. In line with this, the upcoming Budget must provide for massive investment in health infrastructure.