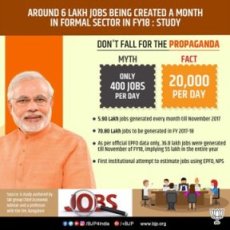 The Mystery Behind 4 Million Jobs In 8 Months

The Mystery Behind 4 Million Jobs In 8 Months

Editor-in-Chief of indiacommentary.com. Current Affairs analyst and political commentator. View all posts by this Author
People are not finding jobs. Several ruling party politicians have even advised the youth to sell pakoras instead, although selling tea would be a better option for then one can dream of being the prime minister one day. Jokes apart, even as the nation faces an army of unemployed, the Employees Provident Fund Organisation (EPFO) has reported, citing figures available with it, that more than 4 million jobs were created in the formal sector in the during September 2017 to April 2018. That translates to nearly 17000 jobs every day. So who is getting these jobs? What is the mystery behind a rush of enrolments in EPFO and the ground reality of jobless youth?

The BJP had taken to advertising this fact in a campaign (see the lead picture). But is this true? Are so many jobs being created or is it just that companies are shifting those they had employed informally to the formal sector to reduce profits? Is this post-GST data released by the EPFO believable as a standalone data or should it be compared with data in similar periods in the past? Clearly, more detailed study is needed to establish if new jobs were added or there was just a shift of those employed informally to the formal sector.

The Economic Times (ET) has unraveled the mystery in an excellent editorial. It so transpires that businesses in the formal sector were underreporting employee heads and outlays on salaries and wages. But ever since GST came into force, businesses find that artificial and common ways of reducing profits shown in the balance sheet have vanished. Hence they are bringing more and more workers on the rolls. This is a very plausible theory to explain the mystery.

Another big issue is that generation of the so-called black money has also diminished. Previously, businesses used to take purchase bills of sundry items from the market to reduce profits. The amount paid by cheque to the biller was returned in cash, after deducting the agreed commission. After GST, it is becoming increasingly difficult for big businesses to procure false bills. This has dried up their source of generating unaccounted cash.

As the ET has explained, this is a boon for workers as they will now be formally employed and enjoy all the benefits of the social security system in place, like minimum wages, fixed working hours, holidays, PF and ESI. It will also benefit trade unions and NGOs monitoring Indian exporters for fair labour practices. This is one more happy spin-off of GST that will benefit the economy.