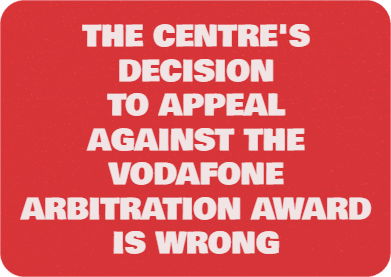 The Government Must Accept The Arbitration Award And Move On

The Government Must Accept The Arbitration Award And Move On

The NDA government is very concerned about India's image abroad and wants to attract foreign capital investment under its Make in India initiative. For this, it needs to make India an attractive investment destination where, among other things, a stable and transparent tax regime is one of the main requirements.

But the question in the Vodafone case was not of the law as it stood but a law that was changed with retrospective effect to bring the transactions under the tax net. It had amounted to changing the goal posts after the start of the match and was against the norms of a stable and transparent tax regime.

Since such changes in law go against ease of doing business and erode investor confidence, thereby making India a less attractive investment destination. With the thrust on Make in India and the government's efforts to make India the preferred investment destination for companies exiting China after the pandemic, the government should have accepted the arbitration award and moved on. That would have boosted India's image manifold.

But it seems that the same mentality which went into drafting the legislation with retrospective effect is once again at play. It is very unlikely that any court in the world would think of it as a matter of the law as it stood. When the Vodafone deal was inked, the law was different. It was changed precisely to tax the deal. Hence, most courts (as even the Supreme Court did in India) would give relief to the company against a law that was enacted after it completed the transaction.