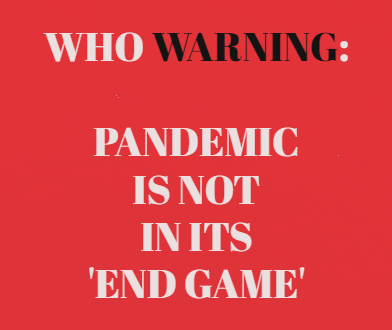 The 'End Game' Of The Pandemic Is Not Playing Out, Yet

The 'End Game' Of The Pandemic Is Not Playing Out, Yet

The World Health Organization (WHO) has issued a timely warning for governments and people not to believe that the pandemic has played out its course and is ending. It has said that in nine weeks it has received reports of 80 million cases worldwide, more than the whole of 2021. It also said that since there were so many cases in such a short period, there are huge chances that more variants might emerge and talks of 'end game' due to Omicron are not justified.

This is a correct assessment. Although India is witnessing a fall in cases now, the very fact that more than 3 lakh cases are being reported daily for the last few days means that community transmission has set in. Community transmission affords the virus a chance to mutate further. In any case, Omicron has numerous spike protein mutations and it has the potential of infecting a large number of people, up to 5/6 times more than Delta and it has not run its course in India.

Hence, to assume that the high number of infections in Omicron will lead to herd immunity and result in 'end game' for the virus is dangerous, as WHO has warned. It has been seen that the Covid virus mutates and breaks the vaccine shield. Although the repeated infections, especially in those fully vaccinated, are not life threatening, they can still lead to large scale infections and thus put a lot of pressure on the health infrastructure of the country.

It is seen that a kind of virus fatigue is setting in. People have begun to think that since the virus is not being stopped by vaccines and people are getting infected multiple times, there is no way to stop it. Hence, they have begun to lower the guard and are becoming reckless. This is not good. Now is not the time to relax. India is still reporting more than 3 lakh cases daily. If cases have started falling in major cities, they can start to rise again if people do not follow Covid protocols. New variants can emerge if caution is thrown to the winds. The fight against Covid is not over yet.