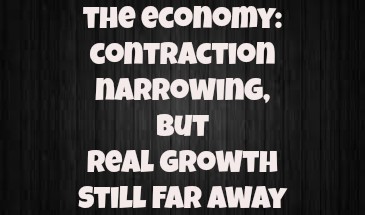 The Economy: Contraction Slowing, But Real Growth Still A Long Distance Away

The Economy: Contraction Slowing, But Real Growth Still A Long Distance Away

The Indian economy technically entered a period of recession as it contracted by 7.5 % in the second quarter of 2020-21. Although the decline was lower than expected (most economists had expected a 10% decline while the RBI had put out a figure of 8.6%), still the slump was enough to sound alarm bells. While the government said that the numbers were better than expected and the potential for upsurge was visible, it also sounded a worrying note for a second wave of Covid infections.

But the figures are not so rosy. Except for agriculture, which grew at 3.4% (Q1 3.4%), manufacturing which grew at 0.6% (Q1 -39.3%), and power and gas, which grew at 4.4% (Q1 -7 %), most other sectors continued to show negative growth. Services continued to be heavily in red. Although the rate of contraction was narrowing, yet the sentiment was not improving.

Core sector industries showed a decline of 2.5% as refinery output and steel production declined enormously. The dismal performance of this sector has a huge bearing on the overall industrial data as core sector carries a weight of 40%. Similarly, the services sector has always contributed handsomely to the GDP. It is a sign of the times we live in, where personal contact is avoided, that the services sector is showing continued negative growth. It also means that despite penetration of mobiles and internet, online transactions have not really taken off as expected, which was reflected in financial and professional services declining by a bigger 8.1% in Q2 (Q1 5.3%).

When it is considered that Q2 included the festive season buying, one does not have much hope for Q3 based on these numbers. Demand has not shot up as a whole and the December GST collection figures will give a better picture of which way the economy is headed from here. Although the government talks about having done much through its Covid packages, those were all supply side and lending packages. They have clearly not had the desired effect of boosting demand. Hence, the government should not further delay investments in infrastructure projects. Only then will core sectors show positivity and the whole economy will perk up as a result of that.