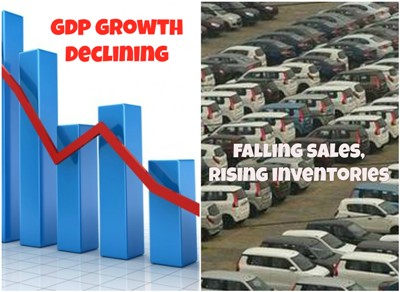 The Economy Is In Severe Distress And Needs Major Intervention

The Economy Is In Severe Distress And Needs Major Intervention

There are many options available with the government to revive an economy in distress. Accordingly, a pro-active government should be ready with a Plan A, and an efficient government will add Plan B, C and D to it, when first signs of distress appear. In any given situation, the first requirement is to identify the type of economic distress and then design the revival plan accordingly. The government has a pool of brilliant economists at its disposal and it can always requisition help from outside experts. The only requirement to act is political will.

But India is different. Here, when signs of economic distress rear their head, the ruling dispensation spends months denying it. Ever since jobs became scarce in India from the middle of the NDA's last term, the government was in a denial mode. It published various data, in colourful infographics to boot, to show that it was opposition propaganda, backed by a section of the media that was against it, and jobs were in fact expanding.

In its second term too, the government has chosen to ignore the warning signals, like falling auto sales, severe contraction in manufacturing activity and almost no demand for bank loans. It is still denying that there is something seriously wrong. Most government spokespersons pointed to the "strong fundamentals" of the Indian economy and said that it will bounce back. Others tried to show that even at 5%, the economy was growing at a faster rate than many other countries.

But that is not the ground reality. There is severe economic distress all over the country. Most automakers have reduced production and laid-off workers. Many auto dealerships have closed. The auto industry is the bellwether of manufacturing activity because it, along with downstream auto component units, employs nearly 50% of the workers engaged in the manufacturing sector. Hence, if they start shedding people from the workforce, the chain effect is disastrous for the economy. The common man has started feeling the pinch and has now become vocal as his or her income goes down due to lack of business.

Apart from removing a ban on the purchase of new vehicles in government departments, the government has done little to address the problems being faced by the industry. The result has been that auto sales have continued to decline and August was the 10th straight month they have gone down. The situation has reached a critical level. This is all the more distressing as India was emerging as the go-to destination for the auto industry in the last few years and major car manufacturers were ready to invest in manufacturing facilities in the country. The dream is souring fast.

The government has to act fast to reverse the downtrend. The time for cosmetic, short-term or knee-jerk response is over. There have to be major investments by the government in the infrastructure sector. This will result in increased demand for steel and cement. There will be a cascading effect on other industries. Once money starts flowing in the economy, sentiment will improve. Then, the government needs to look at structural reforms. Deep structural reforms in multiple sectors are required to give the economy a direction and prod the private sector to start investing again. These reforms must necessarily include measures to cut red tape and ease the process of doing business in India. That is absolutely necessary to attract FDI as foreign investors were not impressed by taking back of the tax imposed on their earnings in the budget or the economic package announced recently. The government has to do all this and more if the economy is to grow at 7 to 8% and become a $5 trillion economy in five to seven years.