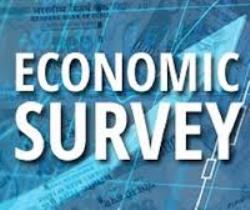 The Economic Survey, presented today by the chief economic advisor (CEA) K Subramanian, while acknowledging that the economy will contract by 7.7% this fiscal, paints a rosy picture about 2021-22 and says that the GDP will grow by 11%, the highest growth rate after the economy was liberalized in the 1990s.

The CEA is excited that the vaccine roll out and India's excellent approach in fighting Covid-19 (containment, fiscal, financial and long-term structural reforms) will ensure that the economy will rebound although it might take up to two years to reach pre-pandemic levels. He added that a V-shaped recovery was already visible and it will strengthen on the back of increasing consumer demand and rising investments.

The CEA said that spending on infrastructure was quintessential to economic recovery (which a lot of experts have been saying for the last 3 months without the sight of any such spending by the government) and roots for the Rs 111 lakh crore National Infrastructure Pipeline (NIP) for 2020-2025, which allots a major share to roads, railways, energy and urban infrastructure. The Survey says this will be a game changer for the economy.

Although GST collections have started picking up, the government is way behind on divestment and the buzz about issuing foreign bonds has also died down. Since the Survey is silent on where the funds will come from, one feels that the government has to do a lot of work before relying too much on the NIP to boost the economy.

The Survey also lauds the agriculture sector for bucking the negative trend during the lockdowns while making a strong case for reforms. It points out that successive past surveys (from 2011-12 onwards) had pointed out the need for reforms. It also points out that the food subsidy bill is becoming unmanageable and makes out a case for raising the central issue price for grains and pulses sold through PDS.

The Survey also pointed out that the India's sovereign ratings did not truly reflect the strong fundamentals of the economy. "India's willingness to pay is unquestionably demonstrated through its zero sovereign default history. The country's ability to pay can be gauged by low foreign currency denominated debt and forex reserves," the Survey pointed out. This does not justify the BBB- or Baa3 (the lowest rung of investment grade) given to it.