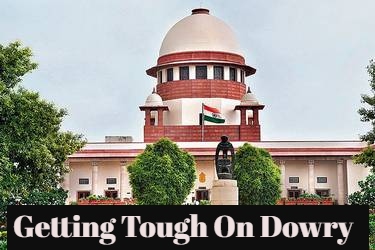 Supreme Court Gets Tough On Dowry

Supreme Court Gets Tough On Dowry

The Supreme Court rightly ruled that the word "dowry" should be given a wider interpretation when deciding what constituted a demand for dowry. It ruled that such interpretation should include any 'material' demand made on a woman, whether in respect of property or a valuable security of any nature, including demand for money for constructing a house. The apex court also categorically stated that "when dealing with cases under IPC section 304B, a provision legislated to act as a deterrent in society and curb the heinous crime of dowry, the shift in the approach of courts ought to be from strict to liberal...any rigid meaning would tend to bring to naught the real object of the provision."

In the instant case, the defence had made out a case that the demand for money was made by the deceased housewife out of her own volition to her parents as she wanted a house to be constructed in her matrimonial home. The apex court, while rejecting the defence, said that the demand made by the deceased had to be seen in the correct perspective as she was being tortured to bring money from her family. It said that "we are of the opinion that the trial court correctly interpreted the demand for money raised by the respondents on the deceased for construction of house as falling within the definition of the word dowry. It cannot be lost sight of that the respondents had been constantly tormenting the deceased and asking her to approach her family members for money to build a house and it was only on their insistence that she was compelled to ask them to contribute some amount."

After this order of the Supreme Court, not only should a wider interpretation be allowed for dowry but courts should also see through the various ruses adopted by the accused to put the blame on the woman and get away from culpability. No married woman would like to burden her family with monetary demands unless tortured and pushed into doing so. Courts will have to be very strict in this regard.

In a separate case, the Supreme Court denied leniency to an 80-year-old mother-in-law saying that her crime was more serious as she tortured her daughter-in-law despite being a woman and more so when her husband used to live abroad and she was alone with them. The court said she abdicated her natural duty to take care of her daughter-in-law and instead ill-treated her. The court refused to let her off but since it was a 15-year-old case, reduced her term from 1 year to three months imprisonment.

The Gyanvapi Order: Doors Opened For Another Protracted Legal Battle

Babli Bouncer - Could Have Been Better