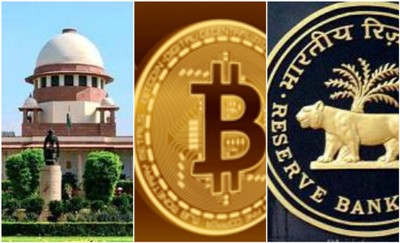 The Supreme Court has quashed the RBI circular issued in 2018 that prevented platforms dealing in cryptocurrency to use normal banking channels for their operations. That in effect meant that despite there being no ban on cryptocurrency, a ban was put in place for its trading as any business could have only taken place if people were allowed to pay for their trade through banking channels. The Supreme Court was of the view that while the RBI was competent to regulate on the issue, its orders must pass the test of proportionality. The court felt that the instant order had failed that test.

A bench of Justices R F Nariman, Aniruddha Bose and V Ramasubramanian said that since there was no evidence of the banking and financial sectors having suffered any loss or damage due to trading and circulation of virtual currency and since there was no ban on it, there was little logic in just putting a ban on the trading of the same through banking channels. It also noted that such a ban has had the effect of crippling such trade to the detriment of the business of the petitioners.

Although the petitioners had questioned the locus standi of RBI in issuing such an order, the Supreme Court rejected their plea. The petitioners had argued that since virtual currencies were not legal tender, the RBI could not regulate the sector. But the court said that the RBI had the powers to regulate cryptocurrency and it may issue circulars or guidelines which the companies dealing in virtual currency would have to abide by. But the court was insistent that in doing so, the RBI must adhere to the test of proportionality.

But the court was categorical about the powers of the RBI to regulate the sector. It said that although the RBI was a statutory body, it was not just another statutory body by virtue of its prominent and exclusive role in regulating the country's banking and financial sectors. The court said that "the RBI is not just like any other statutory body created by an Act of legislature. It is a creature, created with a mandate to get liberated even from its creator". The court added that the RBI "is specifically empowered to do certain things to the exclusion of even the central government. Therefore to place its decisions at a pedestal lower than that of even an executive decision would do violence to the scheme of the Act".

This is a landmark order that reiterates and even widens in a sense, the powers the RBI has under the RBI Act and the Banking Regulation Act but at the same time reaffirms that these powers are not unbridled and all decisions or orders of the central bank must pass the test of proportionality. The court has, in effect, said that although the RBI has the mandate to even get liberated from its creator, it does not have the mandate to make decisions or pass orders that do not strike a balance between the benefits that might accrue and the damage that might happen because of its actions.