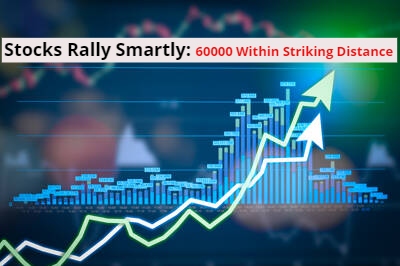 Stock markets rallied impressively on Thursday on global cues and reports of a renewed interest in property buying in India, benefiting realty companies and banks that are exposed to property mortgage. The Sensex touched a record intraday high of 59957 points before profit taking at higher levels pruned the gains. It closed 958 points or 1.63 percent higher to settle at a record closing level of 58885. Nifty rose by 276 points or 1.57 percent to close at a fresh peak of 17823. The rally was led by metals, banks, fintech and realty. Baja Finserv, SBI, RIL, Axis bank, L&T and HDFC were the major gainers, rising by up to 4.51 percent.

The US markets had rallied yesterday after the US Fed announced its decision to continue the $120billion monthly asset purchase programme to support the economy. Fed said that any decision on pull back will be taken in the November meeting. The Asian markets that were spooked after Chinese realtor Evergrande's debt repayment problems became known, have discounted the factor. The Hong Kong markets reopened today with a positive bias as Evergrande announced that it would pay interest to domestic bond holders. Other Asian markets also rallied and so did the European markets.

The markets were showing signs of a tussle between the bulls and the bears for the last few sessions. Each session saw a rollercoaster ride with deep lows and highs. But today's smart and broad-based rally shows that the psychological peak of 60000 (there was resistance to it today with the intraday rally stopping short at 59957) is likely to be achieved in the next few sessions, maybe as early as Monday. But small investors need to be careful as all shares are not rising. Even during the rally on Thursday, Sensex stocks like Dr Reddy's, ITC, Bharti Airtel and Nestle India fell by up to 1.09 percent.