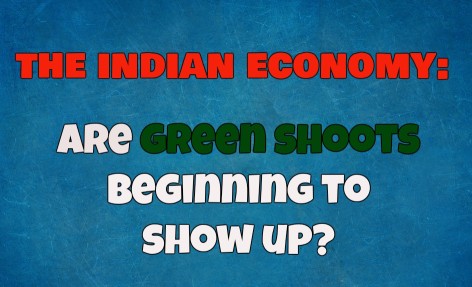 In an article on bloomberg.com, Anirban Nag, citing figures for November and December, says that the Indian economy is perking up and might be shrugging off the effects of a slowdown. This will be music to the years of the NDA as it is currently battling negativity from all sides. He says that five of the eight economic indicators mapped by Bloomberg showed signs of recovery for the second consecutive month (which is also validated by GST collections). Thus, he says that the "animal spirit" (or the investors' confidence in taking action, as described by economist John Maynard Keynes) gauge used to measure the movements of economic activity has shown small, but significant upward trend, signaling that the worst is perhaps over and the economy is ready to bounce back.

The article cited that the services sector index moved from 52.7 in November to 53.3 in December while the manufacturing index moved from 51.2 to 52.7. These might seem minuscule and largely insignificant changes to most observers given the size of the Indian economy, but the fact is that in these depressing times, any reversal from contraction to growth is a signal that investor confidence is returning, albeit at a snail's pace. If one sees that for six months before the last two months, the Indian economy was contracting and GST collection was way below Rs 1 lakh crore, these small changes provide immense hope that a turnaround is about to happen.

But for the turnaround to gather momentum, two things must happen. The government must bring about structural changes in the economy and invest hugely, either on its own or through the PPP route. It must also bring viable projects that inspire investor confidence. The projects in the pipeline are not hot enough. Interest in infrastructure must be revived (and not only of the bullet train kind) and there must be a rethink on the funding of power projects through loans. Instead, the market for corporate bonds must be made vibrant and projects with long gestation periods should be allowed to be funded exclusively through this route. This will ease the pressure on banks and maybe reduce bad loans.

The government must take the signs of revival as a good omen before the Union budget. It must announce far-reaching structural reforms to shake up the economy and inspire investors - both domestic and foreign - to start investing again. Even the IMF has said that the slowdown is temporary. But without government intervention, investor confidence is unlikely to perk up and the economy will not be able to return to an 8 or 9 percent growth rate that it can easily achieve, given the fundamental strength and the size of the market.