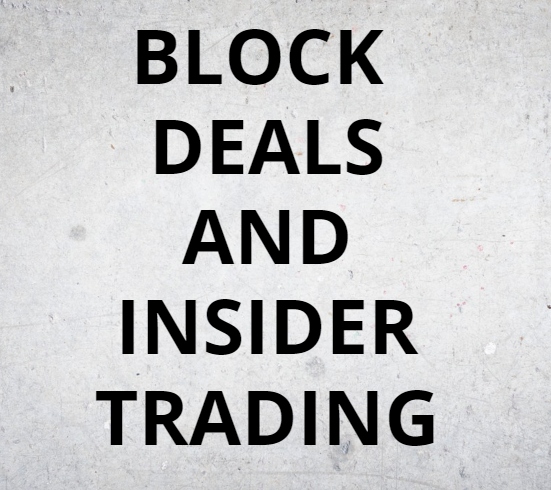 Block deals, even though conducted as per Sebi rules and within the trading parameters of the stock exchanges, do generate suspicion of insider trading as people would always question the need for conducting a block trade and the timing of such trade. There will always be suspicion that those in the know (like brokerage houses or institutional investors) of such bulk deals use the knowledge to conduct independent trades ahead of the deals and enjoy extra benefit that is not available to the ordinary shareholder. But these deals can also be need based, or based on the question of demand and supply, and there might not be an element of speculation involved. Still, convincing others for that is tough as Sebi might be realizing after a number of big-ticket foreign portfolio investors (FPI) have complained to it about 'underhand' block deals and the insider knowledge that is allowing some entities to gain from them.

As per current rules in place, these deals can be conducted in a special trading window or during normal trading hours also at stock exchanges and the pricing should not be more than 1% in variance with the closing market price on the previous day. The other condition is that the whole deal should be more than 0.5% of the shares of the company. Sometimes, these deals are kept just below that level to prevent reporting. But those who know that such a deal is going to happen can always profit from their insider knowledge by trading in the said shares before the deal is actually conducted. For instance, if an institutional investor is buying in bulk, the price might rise and people will insider knowledge will also buy in small lots to profit from the rise in price. On the other hand, if a big investor is selling in bulk, those with knowledge will also short sell to profit from it.

Although these are unethical deals in the strictest sense, but there is little that Sebi can actually do to prevent them. For, those with insider knowledge can resort to hundreds of ways to mask their trades. Neither can Sebi prevent block deals nor can it truly prevent people with insider information to profit from them. The best it can do is to study the rules that are in place for block deals in other mature markets and use them to make the process for such deals more robust and transparent in India. For, if the FPIs are miffed, the foreign fund inflow will stop. Hence, they should be allowed to operate in a market that is free of irregularities and underhand deals. Sebi must look into the matter and come out with a comprehensive regulation that makes block deals transparent and stops insider trading related to such deals.