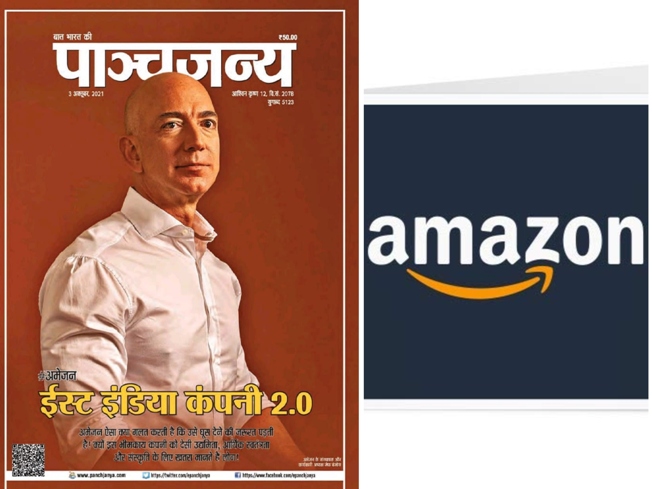 It is very easy to attribute ulterior motives to anyone, any company or any organization. But when it is done without proof and despite that person, company or organization doing exemplary work to contribute to economic growth, it smacks of agenda-based commentary. After taking on Infosys last month for the glitches in the Income Tax portal and alleging that it was in cahoots with "Naxals, Leftists and tukde-tukde gang" to destabilize the Indian economy and was working against national interest, the RSS-linked weekly Panchjanya has now said that Amazon is East India Company (EIC) 2.0.

The article bases the premise on the book Operation Red Lotus by Parag Tope which postulated that East India Company managed to take control of India by attacking three freedoms - political, economic and cultural. It then goes on to build the case by saying that by bribing government officials to bend rules, Amazon is trying to attack political freedom; by selling products sold by the local shops at a much lower price and by importing goods from China and selling them under more than 300 brands developed by it, it is attacking economic freedom and finally, by streaming content that goes against Indian culture on Prime Video, it is attacking cultural freedom.

But none of these hold good as Amazon is not the only entity doing all of this. Although it is a crime (and if Amazon is involved, it will obviously be punished as per Indian law) bribing government officials to gain favours is endemic in India. But that is just for removing a certain stumbling block in a certain transaction and the officials involved are often not so highly placed as to give Amazon political dominance. This is being done by many in the corporate world. In fact, the common grouse of businessmen all over India is that they have to fudge accounts and generate black money as they have to bribe officials. Yet, the scale of disclosures in the Amazon case is very high and only a proper inquiry will prove how and why it chose to pay the bribes, if it did. But that does not make it EIC.

The second charge, that it sells products at much lower prices than local shops and imports from China and sells under own brands is also not unique to Amazon. All ecommerce platforms in India are doing it. Deep discounting is the preferred business model for such platforms and it part of customer acquisition and retention cost. Own branding of both local and imported products is also universal and all platforms do it, either directly, through associate companies or through third party alliances. Again, what Amazon is doing is not exclusive to it. The article forgets to mention that Amazon is providing direct and indirect employment to lakhs, has helped local shops become sellers on its platform, is using local kirana stores for last mile delivery on its Pantry section and is contributing a handsome amount as GST and other taxes. It has also helped many India businesses to grow by associating with it as logistics and other partners. Instead of trying for economic dominance, Amazon is empowering Indian businesses. Yes it is also making profits but that is the very idea for which it started business. Yes there are many complaints against it by sellers on its platforms for unethical dealings and the relevant authorities are looking into them. But again, it does not make it EIC.

The final charge that Amazon is making an assault on culture by streaming content against Indian culture (who decides this?) on Prime Video also does not hold for the same reason - Amazon is not the only OTT platform doing so. Homegrown platforms such as Zee5, MX Player, and the regional ones are all streaming mature content that has abusive language and sexual content. This is because the CBFC writ does not run for OTT content. The government is seized of the matter and even the OTT platforms have a self-moderation mechanism in place. Then, one has the remote in hand and can easily choose to give an offending (to him or her) content a miss. Further, Amazon is helping the video content industry grow by commissioning original series made in India in all languages which provides work to actors, technicians and all those connected to the industry. Since Amazon is not alone in streaming the content which many may find against Indian culture, the charge of attacking culture does not hold. Also, it does not make it EIC.