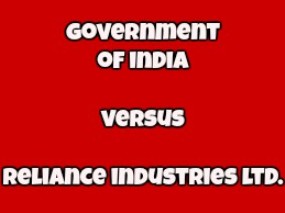 The government has moved with alacrity to protect the interests of the country after the debt-ridden Reliance Industries Limited (RIL), owned by the richest man in India, Mukesh Ambani, decided to sell 20 percent of its stake to oil major Aramco of Saudi Arabia. In an application before the Delhi High Court, the government has argued for a restraining order against the sale as RIL is under obligation to pay a monetary compensation under the arbitration award in the Panna-Mukta and Tapti (PMT) gas and oil fields dispute.

The government has contended that since RIL is facing massive debt and is "in the process of selling, transferring, mortgaging, disposing of, alienating and creating third-party interest in the moveable and immoveable properties to cover its debt," it is not sure whether the company has made or will make a provision to pay the final award under the PMT arbitration. Hence, the government, in order to secure its interests, wanted the court to restrain RIL from selling its assets, including the stake sale to Aramco.

The Court decided to take cognizance of this matter and asked the directors of the company to file an affidavit listing its assets. It said that it will take up the matter further in the next hearing in February. This is the correct step. The government will need to secure itself as it might happen that RIL might sell assets and retire its financial and commercial debts to lessen the burden. But it might not provide for the arbitration award or might delay paying it or might not pay it at all.

RIL has disputed the government view by saying that although the final award that was announced in the PMT arbitration was in the nature of a monetary compensation, the amount was not quantified. RIL added that the award has been challenged in British courts and hence, as of now, the company has no liability on his account.

But this is a specious argument. Since the award is in the form of monetary compensation and given that the stakes were very high, the government seems to have arrived at a very conservative figure of Rs 30000cr. If the company is genuinely interested in paying the award to the government, it must show its good intent by either securitizing an asset of that value in favour of the government or depositing the amount with the court from the proceeds of the stake sale to Aramco or in any other way. This should be done notwithstanding the pendency of the appeal in the British courts.

The government, on the other hand, should not pray for a restraining order. Instead, it should ask the court to direct RIL to deposit the amount in a specified account. Putting a stop to the stake sale will send out the wrong signals. RIL should be allowed to go ahead with the stake sale in order to minimize its interest burden and bring in an experienced partner. It will in the interests of the nation. But it should provide security to the government so that the government is able to recover its dues under the arbitration award in the PMT case if it finally goes in its favour.