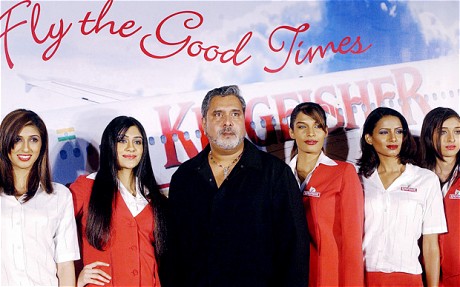 Right Time, Good Time or Time Over for Mallya?

Right Time, Good Time or Time Over for Mallya?

Editor-in-Chief of indiacommentary.com. Current Affairs analyst and political commentator. View all posts by this Author
Vijay Mallya is reported to have said that he was âforced to fleeâ India and that the time is not ârightâ for him to return. Did someone put a gun to his head and ask him to leave the country? Or did he get inside information from his many connections in the corridors of authority that his arrest was imminent? Being a lawmaker, Mallya should be aware that running away from legal problems is never the solution and the ârightâ time is the time to be decided by courts in India. Tweeting from the comfortable confines of his pad in the suburbs of London when there are so many cases pending against him make him an absconder despite his allusions to the contrary.

It seems Mallyaâs IOUâs across the establishment are not working any more. He is complaining of media trial and reminding owners and editors of favours granted in past. That he has not yet publicly said the same for politicians means that he is playing for time and hoping that his many political friends will get him out of this mess. Already, two lightweights, Farooq Abdulla and H D Deve Gowda have spoken in his favour. Deve Gowda even tried to give the issue a regional colour by calling him a son of Karnataka despite Mallya claiming that he is an international businessman.

With banks pursuing cases against him with renewed vigour and everyone from the RBI to the government and from SEBI to the Supreme Court training their lenses on willful defaulters, there is no way Mallya can hope to save his assets given as guarantee to banks. Mallya would be best advised to acknowledge that time is up for him. It is reported he will still have something left over after the banks take their dues although that might not be enough to live life king size as he is used to. He should salvage what he can from the ruins. After all, the good times are going to end in any case.