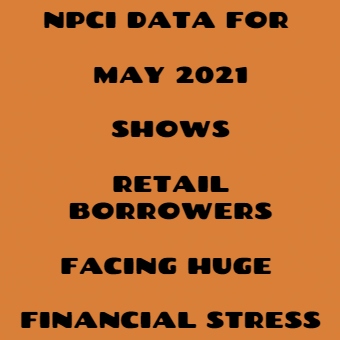 In May 2020, when the first wave had hit hard and a lockdown was in place for over a month till then, there was huge financial stress in the market with retail borrowers not being able to meet commitments in the form of getting their standing instructions for payment of loan EMIs or utility bills passed. At that time, 30.3% of the standing instructions were returned unpaid in value terms. But the ferocity and lethality of the second wave, even though it has seen lesser economic disruption, has meant that in May 2021, that level of bounces has been surpassed. The National Payments Corporation of India (NPCI) has released data to show that last month 30.7% instructions were returned unpaid in value terms and it translated to 35% in transaction terms. Although some of these transactions were obviously paid up by the clients once they got the intimation from the bank as retail borrowers do not willfully like to turn defaulters as it impact their credit rating, the huge number of initial default does point to financial stress among retail borrowers.

The very fact that standing instructions were not honoured means that the borrowers did not get money in their bank in time. For salaried class, it means that either the salary amount was credited in their account later than it usually happened or that the money was spent before the request for clearing of standing instruction hit the account. For business class, it meant that they were not having enough income. In both cases, even if the amount was paid later, it is clear it was paid through other means (savings, probably) and not from current inflows. The NPCI data also revealed that the bounce rates have been going up sequentially since March 2021. This is a clear indication that retail borrowers are facing financial stress and it is similar to, if not more than, what they faced last year. The RBI had announced the Resolution Framework 2.0 this year on May 5 to help borrowers overcome this stress. They must avail the same to keep their credit history intact if they are facing problems in meeting their commitments.