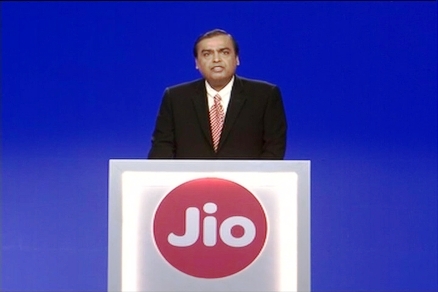 Editor-in-Chief of indiacommentary.com. Current Affairs analyst and political commentator. View all posts by this Author
It was obvious that Mukesh Ambani would set disruptive pricing as the USP to make Reliance Jio the number one telecom company in India. But the manner in which he chose to do it has stunned other operators. Ambani himself called it data-giri or muscle-flexing backed by data backbone.

Reliance Jio has put in place a huge, pan-India network of 4G data services which will include convergence to provide high-end entertainment and other services to users. Jio is in the process of testing this network. It has used a highly attractive  but as competitors allege, unethical  route of offering Indians 90 day of free voice and data to test its network. While the ever lengthening queues at its stores have shown that customers are lapping it up, the offer has ripped apart the 4G plans of other telcos.

The Jio offer has many things to attract the customer. Accepting the international standard, Ambani announced that customers will not be charged for two services. Hence, all its data packs will offer free voice calls, sms and national roaming. This in itself will be a game changer.

Then, Jio has priced its packs at least 80% lower than competition. In another innovation, the price will go down as consumption increases. Hence, for a heavy home user, it could work out to just Rs 50 per GB of high speed 4G data, with free voice calls and sms. The packs for enterprises are also priced competitively.

Cheap access to internet on high speed networks is going to be the very backbone of digital India. But this access has to maintain net neutrality. If Jio is not going to lead users to a gated community in future and if it can maintain its network at these prices, it would have done a signal service in the area of digitization of the country. It will also mean that the other telcos will think twice before starting their zero plans, if they are allowed by TRAI, as not too many would be attracted to a closed internet when access to full internet will be available at an affordable price.