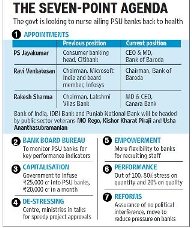 Editor-in-Chief of indiacommentary.com. Current Affairs analyst and political commentator. View all posts by this Author
The government has grandiosely named its reform initiative for Public Sector Banks (PSUÃ¢â¬â ¢s) as Indradhanush. But the measures announced till now seem to be hesitant and half-baked. Hence the rainbow is hidden by dark clouds.

The government has announced a seven pronged reforms package that falls short of what is urgently needed for these banks, several of which are gasping for survival. The package announced includes appointments, board of bureau, capitalization, empowerment, framework of accountability, de-stressing and governance reforms. While the government should be commended for making a beginning, it needs to be stressed that this is a case of too little, too late.

A good measure introduced under framework of accountability is the change from the old method of topline and balance sheet growth to profitability. Under governance, the government announced that performance incentives and ESOPs will be given. This can go a long way in increasing efficiency.

The talk about empowerment, framework of accountability and governance reforms will come to naught if government holding is not brought below 51% through disinvestment. For, if the government holds more than 51% shares, the finance ministry meddles in the working of the banks and sets them unrealistic targets for populist schemes like Jan Dhan. Since private banks are under no obligation to implement these schemes, it becomes tough for PSUÃ¢â¬â ¢s to compete with them and report profits under the stress of forced accounts that earn no revenue.

PSU banks will remain sick as long as political interference and Finance Ministry control remains. Professional management will work only if it is accountable to the Board of Directors and not to the finance secretary or the minister. Hence, the government should seriously think about reducing its holding, and thereby the stranglehold, on these banks to allow them breathing space. It is sad that banking entities that have massive infrastructure to cater to millions of customers efficiently are forced to commit these assets for purposes that have little or no relation to banking.