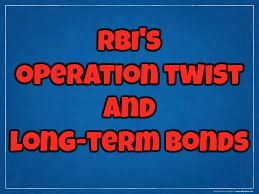 The RBI, for the first time, announced that it would simultaneously buy and sell government bonds in an open market operation (OMO) designed on the lines of Operation Twist in the US several decades ago. This operation is mainly conducted to calm down the long-term bond market in times of downturns in the economy. It is a market operation designed to bring long-term bond yields closer to the repo rate.

The RBI was worried because despite reducing the repo rate by a cumulative 135 basis points since January 2019, it has not been able to make the financially stressed banks in India to pass on more than 50 basis points to the end-user. It tried mandatorily linking the lending rate to an external benchmark, including the repo rate, but to no avail. As a result, and with fiscal slippage on part of the government and rising inflation, the 10-year G-Sec market saw a spurt in yield which went up to 6.8% just before the RBI announced the OMO.

Basically, the RBI decided to buy Rs 10000cr worth of G-Sec maturing in 2029 and simultaneously sold those maturing in 2020 for the same amount. The immediate result of this was that yields came down on the long-term bonds by around 20 basis points on the day the announcement was made. Also, the yield on shorter-term bonds (up to five years) rose by 16 basis points. That resulted in flattening the yield curve. It also helps in reducing the borrowing cost for the government. It is also beneficial for the retail customer as high yields on long-term bonds make banks jack up interest rates on lending. If rates for long-term bonds come down, banks will reduce their lending rates. That is also one of the unsaid objectives of the OMO -  to make banks lower lending rates.

But experts are not convinced about the long term efficacy of the operation. Yet, almost all agree that it will have a salutary effect in the short term and take the heat out of the long-term bond yields. But Operation Twist was never designed as a permanent policy tool. It has to be used sparingly whenever it is seen that excess liquidity creates a rally in the short-term bonds market and pushes up the yield of the long-term bonds. For now, the RBI operation seems to have had the desired effect. But if inflation keeps on rising and fiscal targets are not kept under manageable limits, long-term bonds market will heat up again. Then, no amount of OMOs will be able to bring them down.