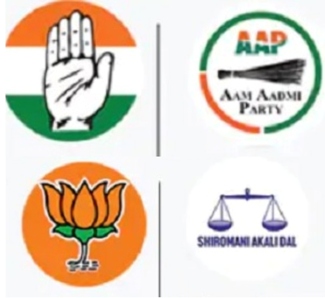 Despite the farmers jumping on to the electoral bandwagon and the BJP forming an alliance with Amarinder Singh and the breakaway faction of the Shiromani Akali Dal(SAD), the main fight in Punbaj is between the Congress and the Aam Aadmi Party (AAP). Opinion polls have shown that AAP has surged ahead and is likely to be the single largest party in a hung house. But in a scenario that will witness multi-cornered contests for most seats, it will not surprise many if AAP gets a majority.

While the Congress seems to have little problem in seat allocation with Navjot Singh Sidhu having his way in most cases, there have been instances of aggrieved hopefuls giving notice of fighting as independents, the most prominent among them being CM Channi's brother Dr Manohar Singh. In another hiccup, after he was denied a ticket from Moga due to the induction of Sonu Sood's sister Malvika, Congress MLA Harjot Kamal joined the BJP. The Congress has also not declared its face for the elections.

AAP on the other hand conducted a poll and asked the people who they would like to see as their next chief minister if the party won. The results of the poll, naming Bhagwat Mann as the chief ministerial candidate were revealed by party supremo Arvind Kejriwal on Tuesday. While it was trying to push its problem to the people, it created a buzz and a huge number of people voted. This kind of involvement of the people will also help the AAP in winning supporters. AAP is also conducting a spirited campaign and offering many freebies to the people.

The farmers' foray in electoral politics is not going the way they would have hoped to. The fight between Balbir Singh Rajewal of Sanyukt Kisan Morcha and Gurnam Singh Charuni of Sanyukt Sangharsh Party to emerge as the main representatives of the farmers is taking a toll and will obviously divide the votes of the farmers if they choose to support either of them. This will benefit the other parties. The farm leaders will achieve the opposite of what they had set out to.