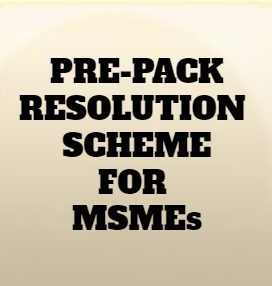 The government has done well to introduce a pre-pack resolution scheme for stressed micro, small and medium enterprises (MSME) with defaults up to Rs 1 crore. Under this scheme, even before the company goes into liquidation under the IBC, the existing management can propose a resolution plan to the creditors, keeping the operational creditors fully secured. If 66% of the creditors approve the plan, they can approach the NCLT for final approval. The whole process has to be completed in 120 days.

During this time, the company will continue to be run by the existing management. This will ease the resolution process and will initially make it comparatively litigation-free as promoters will not create stumbling blocks in the process. But if 66% of the creditors wish, they can press for a Resolution Professional (RP) to run the management even during the process after getting permission from court. The RP can invite competing bids under some circumstances, the main being if the claims of the operational creditors are not proposed to be settled in full. Once 66% of the creditors approve the plan submitted by the debtor, they can apply for approval by the NCLT. Any proposal submitted by the debtors with the intention to defraud will attract penalty.

This is a good move as it will ease the process for MSMEs. There will be less litigation and the NCLT will also not be burdened too much. The timeline allowed is also faster compared to the 330 (revised from 270 days) days in the IBC. If the main motive of the IBC is to work for faster redeployment of stressed assets then this is an excellent way to go about it. If existing promoters are allowed to restructure the company without losing control and if they can find the capital to do so, they must be given a chance. Depending upon the success of the scheme, it can later be extended for bigger defaulters.