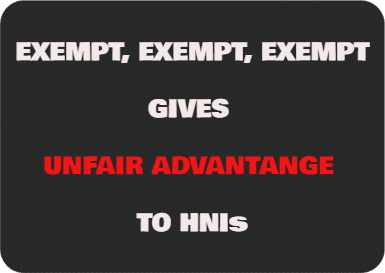 PF Rule Change Is Not Unfair, It Was Being Misused By HNIs

PF Rule Change Is Not Unfair, It Was Being Misused By HNIs

Provident funds investments (subject to a limit) and interests earned on them were treated under the exempt, exempt, exempt regime for taxation purposes till a few years ago. But widespread misuse by some HNIs, who used to invest much more than was statutorily required to earn a higher rate of interest (as compared to most other investment instruments and also escape tax on interest earned) has made the finance ministry focus on streamlining the provisions in order that there is no revenue loss to the government.

Last year, the finance minister had changed the rules to put a cap of Rs 7.5 lakh on contributions to PF, superannuation schemes or NPS and any contribution above that cap was made taxable as a perquisite in the hands of the employee. This year, the Budget has made interest earned (on accrual basis) on PF taxable if the annual contribution is above Rs 2.5 lakh. There was widespread criticism of the move as many experts felt that it will make PF investment unattractive for many.

The government has now come out with figures which show that top 20 HNIs have Rs 825 crore in their PF accounts. It also said that 1.2 lakh account holders, just 0.3 percent of the total 4.5 crore, were investing huge sums in their PF accounts. Since PF offers a higher rate of interest and the account cannot be attached under any legal proceedings, they feel that it is a safe route to invest money. But the government loses revenue as the interest is totally exempt from tax.

One feels that the average salary earner is not going to be put at a disadvantage by this change. It is only those that earn huge salaries and take advantage of the PF account to earn a higher rate of tax exempt interest that will be affected. But they should at any rate be paying tax on the interest earned. Hence, this is a good move by the finance minister and it will bring in additional revenue from HNIs without impacting the common man.