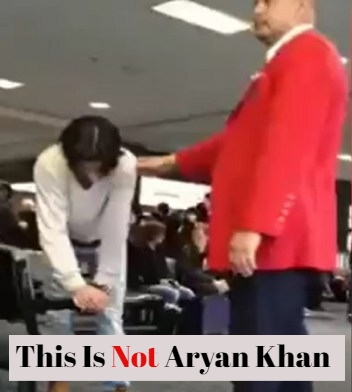 Old Video Of US Actor Used To Target Aryan Khan

Old Video Of US Actor Used To Target Aryan Khan

A mischievous and slanderous video is being circulated on social media which claims that the completely sozzled person in the video is Aryan Khan, son of Shahrukh Khan, and he urinated in public in an airport abroad. The person in the video uncannily resembles Aryan. But The Times of India has reported (also fact-checked and reported by many other media platforms) that while it is not a fake video, the man is the video is definitely not Aryan Khan. He is Bronson Pelletier, an actor from the film the 'Twilight'. Pelletier reportedly committed the act in a highly intoxicated state at the Los Angeles International Airport and was sentenced to two years on probation.

So who are these people who spread this kind of fake news? And how do they manage to dig out such videos where the subject in question uncannily resembles the person they want to vilify? It takes time and effort - and obviously money - to create such fake news and it is obvious that it is not done by someone as a hobby. There seems to be a well-financed 'gang' that is either digging out such videos or doctoring pictures and videos to target selected persons in India. Hiding behind faceless accounts, these persons are misusing social media platforms to abuse, threaten, vilify or damage the reputation of those who they (and those by whom they are influenced) do not like. There is definitely an agenda and a conspiracy behind this.

It will not do to just take down the video (or block the user and take down the offending material, as was done in the Sulli Deals case or has now been done in the Bulli Bai case) and register a case. The police must track down who originally uploaded the video and then trace all those who forwarded it with vile comments. This cowardly group that hides behind the anonymity provided by social media must be tracked, apprehended and punished so that sanity can be restored in social media and citizens are not abused, threatened or vilified.