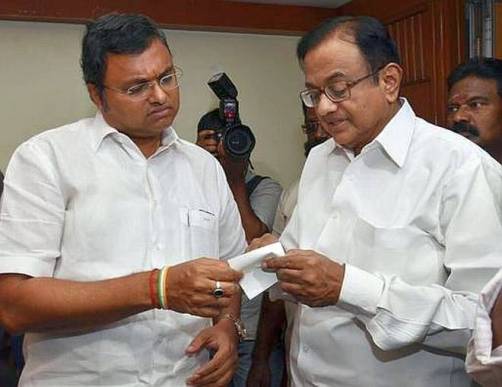 A couple of days ago Raj Thackeray and the MNS displayed bravado and injured innocence when summoned for questioning by the ED in the IL&FS scam. Now it is the turn of P Chidambaram and the Congress. Ever since the Delhi High Court denied anticipatory bail to Chidambaram in the INX Media case, Chidambaram has gone into hiding. When the CBI & ED visited his house the same day, he was not to be found. Today, the Supreme Court declined to urgently hear his petition for bail as his lawyers filed a defective petition (of all things!) and by the time it was rectified, the time for listing was over. But the Congress went into hyperbole with comments such as "this is persecution, not prosecution". Rahul Gandhi tweeted "Modi's govt is using the ED, CBI & sections of a spineless media to character assassinate Mr Chidambaram. I strongly condemn this disgraceful misuse of power."

Can the Congress party or Rahul Gandhi explain how questioning someone whose name has cropped up in a scam, even if he is a former finance minister, amounts to persecution? The party and its leader should first read the remarks of the Delhi High Court which called the case a classic money laundering scam and opined that prima facie, Chidambaram appeared to be the kingpin of the scam. Should the government or the Supreme Court ignore facts just because Chidambaram was a former finance minister and is a leader of the Congress? In fact, since he was a minister and is a well-connected politician, the full force of investigation and due process of law should apply to him. It is upon Chidambaram to clear his name. If he has nothing to hide, he should appear before the investigating team and explain the transactions.

It is being reported that the scam money was used to buy a tennis club in Spain and villas in the UK. That needs a lot of money and P Chidambaram's son, Karti Chidambaram, has always been a high flier and loves to broker deals where his connections can be put to use. Obviously, he was not doing it for free. But the problem was that his father was the finance minister of India and some of the deals needed permission from the ministry. If money changed hand, as alleged by the investigating agencies, the quid pro quo is already evident. It doesn't matter who Chidambaram is or was. If he and his son have committed financial misdeeds and if PC used his position in the government to bestow favours on businessmen, they need to be hauled over the coals. If not, they should explain their position satisfactorily to the investigating agencies and wait for the courts to decide the matter. Raising hell just because he is a politician will assassinate his character more.