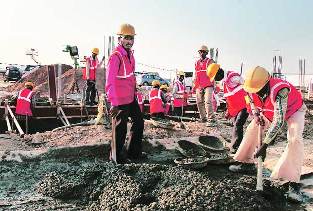 Linus tackles things head-on. He takes sides in his analysis and it fits excellently with our editorial policy. No 'maybe's' and 'allegedly' for him, only things in black and white. View all posts by this Author
There has been a large scale exodus of migrant workers from Gujarat. These workers mainly belong to UP, Bihar and West Bengal. The trigger for the same has been the alleged rape of a toddler by a migrant worker from Bihar. Although there has been no untoward incident against the workers, many of them have decided to flee fearing a backlash.

It has become a regular feature in India to target a whole community for the transgression of an individual. Does the crime of one Bihari migrant worker makes the whole Bihari community criminal? But such is the undercurrent of resentment against migrants all over India that if one of them is caught for a crime, there is a backlash against the whole community or class.

This resentment is difficult to understand. The absence of local talent to fill shop floor jobs or do the heavy and supposedly tedious jobs in the construction sector makes it necessary for the companies to fill the vacancies from the pool of migrant workers. Locals either do not have the necessary requirements and do not upgrade themselves or are not interested in such jobs.

The administration must ensure that the criminal who raped the toddler is punished. It must also ensure that migrant workers are not targeted by vested interests. The economy of the state will take a leap backwards if there is a scarcity of workers. It is in no ones interest to create a situation where migrants from Bihar, UP or West Bengal stop going to Gujarat.