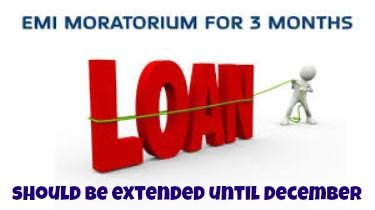 Loan Moratorium Should Be Extended Until December

Loan Moratorium Should Be Extended Until December

It is becoming increasingly apparent that the 'new normal' that is being talked about is not going to be normal at all. With people staring at job losses, cuts in salaries and a huge drop in incomes, the economy will take a lot of time to get back on the rails. This is especially true as a plethora of rules will have to be followed in running business activities. People, with lesser money in hand and facing an uncertain future, will cut back on non-essential purchases for a long time to come, leading to further slowdown in the economy.

Keeping this in mind, the RBI must increase the period of moratorium on repayment of principal and interest of loans to nine months up to December. Even after that, it should direct banks not to insist upon a lump sum payment of the amount accumulated over the nine months but allow people to make the payment in a staggered manner. Since the banks are charging overdue interest as per the rules, they are unlikely to suffer a loss in doing so. Since banks are already providing extra working capital to businesses (up to 10 percent more than the sanctioned limit), they should think of extending the moratorium for other borrowers.

One knows that this will entail a complete recalculation of the EMI charts but given the economic condition, this is the least the banks can do to alleviate the sufferings of the borrowers. The lockdown and resultant mental agony, not to speak of complete stoppage of income for most businesses and salary cuts and even deferment for many employed persons, the majority of borrowers are in no position to pay timely EMIs. The situation is not likely to change much in the next four to six months. Time should be given to small borrowers to get their life back on rails after this huge disruption and they should be provided further relief by extending the moratorium.