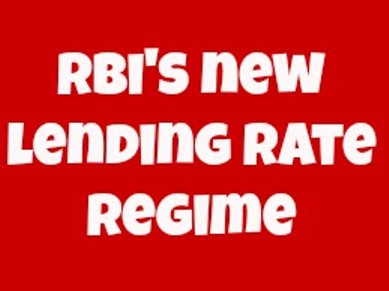 The Reserve Bank of India (RBI) has made it mandatory for all banks to link their lending rates (LR) to an external benchmark â either the repo rate declared by the RBI or the yield on the 3-month and 6-month Treasury Bills published by Financial Benchmarks India Pvt Ltd. For the last few years, the lending rate of banks has come under the scanner mainly because of the huge gap between the repo rate (the rate at which the banks borrow from the RBI) and the LR. It meant that the banks were not transmitting the reduction in the repo rate to retail customers. In the last meeting of the RBI's Monetary Policy Committee, it was pointed out that although the MPC had reduced the repo rate by 75 basis points between February and June 2019, the banks had reduced their LR by only 29 basis points during the period.

Banks have always tried to increase the spread between the repo rate and the LR mainly because they want to increase their profits. Another important thing to note here is that since deposit rates are fixed and cannot be touched till the end of the term, if banks do not lend with some cushion, they will make little or no profits. The lending rate of banks and its relation to some benchmark has been a subject of debate and experiment. When Raghuram Rajan was the Governor of the RBI, he had introduced the Marginal Cost of Funds based Lending Rate (MCLR) regime. But that has also not succeeded. Hence, the RBI has now thought of making the LR flexible by linking it to an external benchmark. But although this concept looks good on paper, there may be many pitfalls that can have a telling effect on the profitability of banks.

To start with, if banks have too many 3-year and 5-year term deposits at current rates and if LR keeps on falling, banks will be paying for interest to depositors than they would be earning from those they lend to, as the deposit rates are fixed. An easy way to go around this is to make deposit rates flexible too, but that would result in too many hostile depositors who would then start thinking of investing in other instruments. The RBI needs to keep a close watch on the new regime and make periodic assessments to ensure that it does not lead to erosion of banks' profitability. If that happens, the already stressed banks will have a serious problem at hand.