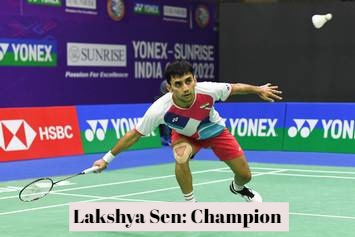 Lakshya Sen Is The Player To Watch

Lakshya Sen Is The Player To Watch

That Lakshya Sen is the hottest player on the badminton circuit in India, nay the world, is now clear in the manner he won the Indian open in Delhi. After having almost missed the tournament due to a false Covid test, the youngster came up with scintillating performances throughout the tournament, capping it with a stupendous show in the finals to win the biggest World Tour tournament of his short career.

In the final, he was up against the reigning world champion, Loh Kean Yew of Singapore. But the way he came out all guns blazing in the second set showed that names and reputations matter little to the aggressive Indian who is fast ascending the charts (ranked 17th in the world before the tournament). Loh did not give anything away in the first set and at one point after Lakshya raced to a 16-9 lead, he came back to first reduce the margin to 14-19 and then raced ahead to 20-19. But Lakshya then upped his game and clawed back in spectacular fashion to save two match points and then win the set.

In the second set, he came out with a calculated plan to unsettle the world champion. The way he made Loh move all over the court with some brilliant smashes was a treat to watch. It was obvious that Lakshya was unwilling to let Loh get his rhythm as he knew that he was capable of coming back like he did in the first set. Unsettled and foxed, Loh started making uncharacteristic mistakes and was beaten fair and square. This win is going to boost Sen's confidence and he will be ready for bigger battles on the world stage. Coach U Vimal Kumar said he was happy the way Sen controlled the game but advised Sen to work on his endurance, core strength and stability around the net.