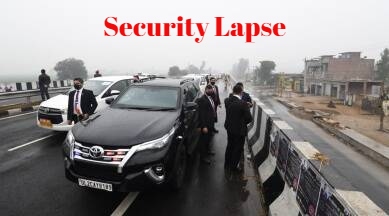 It Was A Major Security Lapse And Needs To Be Probed

It Was A Major Security Lapse And Needs To Be Probed

Shorn of political grandstanding and bias according to which side of the political fence one is, the security lapse that resulted in Prime Minister Modi's cavalcade getting stranded on a flyover in Bhatinda in Punjab is a serious matter and needs probing. The simple reason for that is since the Prime Minister's travel route has to be sanitized and made risk free, the slip up, for whatever reason, cannot be condoned. Accountability has to be fixed and those responsible must be punished as per law.

It is a fact that after the Prime Minister could not proceed to the destination in a helicopter from Bhatinda airport due to bad weather, the route of his road journey was discussed and finalized with top Punjab police officers, along with the entire team that is responsible for his security. If the farmers were blocking the route (Punjab police has said they could not have removed the farmers by force, which is absolutely correct), why was that route selected and approved? If Punjab police thought they would convince farmers to clear the highway by the time the Prime Minister's cavalcade reached the spot, what went wrong and why were they not able to do so? Or if the farmers decided to block the road after the decision was taken, was the news of Prime Minister taking the route leaked to them? If so, by whom? If not, then why couldn't the Punjab police prevent them from blocking the road?

These and other questions need to be answered. It is not about BJP versus Congress or Centre versus Punjab or Modi versus the farmers or any other imagined conflict. It is simply about a slip up in the security of the Prime Minister of the country. The Supreme Court is now seized of the matter and already asked the Punjab & Haryana HC to seize all records of the visit while asking both the Centre and the state to halt their separate probes. It is hoped that the court will get to the bottom of the matter to find out what went wrong and who is responsible.