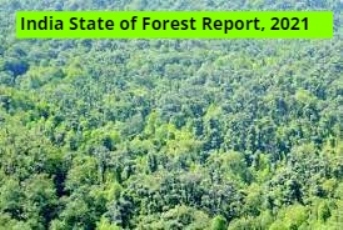 The 17th India State of Forests Report (ISFR) is out. Although it reports that the overall green cover in India has increased in the last two years to cover nearly 25% of the country's geographical area, the fine print shows that the quality of the country's forests is declining. The green cover has now reached 809537 sq km of which 713789 sq. km is forest cover. The ISFR surveys three categories of forests - very dense forests (having canopy density over 70%), moderately dense forests (40-70%) and open forests (10-40%). Areas with canopy density less than 10%, called scrubs, are also surveyed but not categorized as forests.

The survey found that very dense forests have increased by 501 sq km. but the increase is mainly in forests that are protected and reserve forests with active conservation activities. On the other hand moderately dense forests, or "natural forests", have declined by 1582 sq km. Open forest area and scrub area has increased by 2621 sq km and 5320 sq km respectively. Experts say that taken together, these figures indicate a degradation of forests in the country with moderately dense forests becoming open forests and open forests giving way to scrub areas. This, they say, is extremely worrying and should be reversed.

The report has found that Telangana (3.07%), Andhra Pradesh (2.22%) and Odisha (1.04%) have shown the highest increase in forest cover while five states in the Northeast - Arunachal Pradesh, Manipur, Meghalaya, Mizoram and Nagaland have all shown loss in forest cover. In terms of types of covers, mangroves have increased by just 17 sq km and bamboo forests grown from 13,882 million culms (stems) in 2019 to 53,336 million culms in 2021. The survey also found that 35.46 % of the forest cover is prone to forest fires.

While efforts must be made to further qualitatively increase the forest cover in the country, what is extremely distressing is the loss of forest cover in the Northeast, which was blessed with abundant and natural forests. The loss of cover is as much due to natural calamities as developmental activities. This will damage the biodiversity of the region. It will also lead to worsening of the landslide problem in the region. Experts pointed out that the unique ownership of forest land (which is either owned by the community or is protected tribal land) in the region makes conservation challenging. The government must immediately think of ways to protect the green cover in the region to stop further degradation.