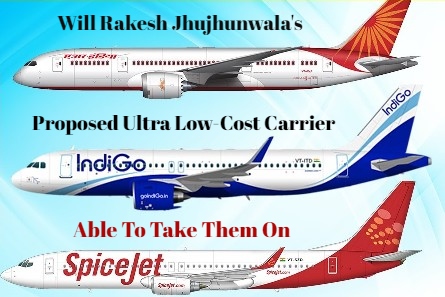 Is Rakesh Jhujhunwala Placing A Safe Bet With Akasa Air?

Is Rakesh Jhujhunwala Placing A Safe Bet With Akasa Air?

Billionaire investor Rakesh Jhunjhunwala has teamed up with aviation veteran and former CEO of the troubled (but now under revival) airlines Jet Airways, Vinay Dube and others to propose a new low-cost airline Akasa Air that is slated to hit the skies by the end of this year if all goes well. Jhunjhunwala is investing Rs 260cr for a 40% stake in the venture and despite the present dismal situation in the sector, is quite upbeat about the future of the aviation industry in India. He hopes to have a fleet of 70 aircrafts within four years to make a serious bid to lure customers from established players with his ultra low-cost carrier.

Although before the pandemic India was the fastest growing aviation market in the world, the restrictions on travel due to Covid-19 have drastically reduced the number of domestic flyers. While 1.3cr passengers flew in December 2019, the number dropped to just 31 lakh in June this year. The result is that most airlines are in the red and even before the second wave hit with fresh restrictions, ICRA had projected a combined loss of Rs 21000cr for Indian carriers, with Air India making up a major chunk.

So does a new airline make business sense at this juncture? It is being assumed that after the divestment of Air India (which the Tatas are strongly pipped to takeover), there will just be four serious players in Indigo, Air india, SpiceJet and GoFirst (again assuming that the Tatas will merge Vistara and Air Asia India with Air India). The revived Jet Airways, when it resumes operations, will initially be a small player. But when the restrictions are fully removed and people take to flying again, growth is being seen at pre-Covid levels or even higher. That explains why a new carrier is being planned by a canny investor like Jhunjhunwala.

But with Indigo having an awesome 55% of the domestic market share, Air India (after its expected acquisition by the Tatas) likely to make an aggressive bid to capture market share and the existing players like Spicejet and GoFirst holding on to their market share, any new airline will need deep pockets and innovative management to survive and make a mark. If a new airline is not able to corner a sizeable market share (say 15-20%) within a reasonable timeframe (say 3-4 years) and keep a tight leash on non-operational costs, it is not going to survive in the ultra competitive sector. But with Jhunjhunwala and Vinay Dube at the helm, it is going to be exciting to watch how things unfold for the venture.