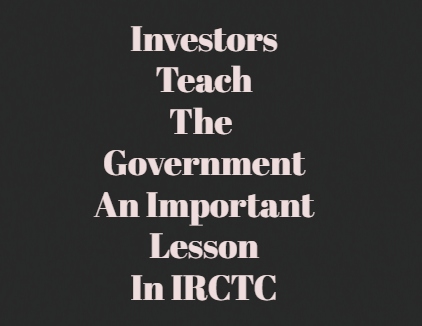 IRCTC: Important Lesson For The Government

IRCTC: Important Lesson For The Government

The IRCTC fiasco on Thursday-Friday should teach an important lesson to the central government - that once it decides to privatize PSUs and lets their share price (and hence valuation) be dictated by market mechanisms, it must take decisions regarding these entities with due care. The government decision to appropriate 50% of the convenience fee that the IRCTC charges its customers for online ticket booking (amounting to a piffling Rs 200cr annually), announced after market hours on Thursday, saw investors hammering the IRCTC share down by as much as 29% in opening trades, resulting in a value depreciation of Rs 18000cr for the government. Alarmed and worried by the development, the government had to backtrack and withdraw the order. The share price slowly inched back to recoup some losses but still closed 7.5% lower than Thursday.

There is no doubt that the government should actively look for additional income streams from the railways as given the investment in the utility and its reach, the returns are very low. But the reaction of investors and the resultant drop in valuation has to be studied before making such decisions in companies that have been privatized and whose shares trade in the markets. Shareholder response is a huge issue and any adverse reaction is not only likely to cause a drop in valuation of the company but also impact future divestment attempts on part of the government. Once the investing community realizes that despite privatization, the government treats these companies like extended government departments, the response to future sell-offs would be muted.

The IRCTC fiasco should prevent the government from doing anything that reduces the profit of the company while benefitting the government as it is no longer the sole shareholder. The Rs 200 crore annually that the government was trying to appropriate from the IRCTC belongs equally to all the shareholders. They were rightly peeved about the unilateral decision. The investors and the share markets have taught the government an important lesson which it would do well to remember forever in case of privatized PSUs.