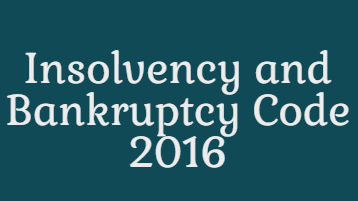 Editor-in-Chief of indiacommentary.com. Current Affairs analyst and political commentator. View all posts by this Author
The Supreme Court has upheld the constitutional validity of the Insolvency and Bankruptcy Code (IBC). The code was mainly challenged on the grounds that it differentiated between financial creditors and operational creditors and put the latter at a disadvantage in various ways. This, the petitioners claimed, was in violation of Article 4 of the Constitution which guaranteed the right of equality to all Indians. The court held that right of equality as meant by Article 14 did not apply in this case and none of the sections of the IBC violated it.

In particular, the petitioners claimed that classifying creditors into different segments was discriminatory, arbitrary and violated the right to equality; that Section 53 of the IBC that placed operational creditors below all other creditors, including unsecured financial creditors, was discriminatory and violated Article 14; that Sections 21 and 24 of the IBC which laid that operation creditors will have no voting rights in the committee of creditors and Section 12A that allowed the withdrawal of an insolvency application violated Article 14 and that Section 29 that laid down the rules for eligibility of persons to be resolution applicants was not constitutionally valid.

The court ruled that none of these sections violated Article 14 and that Section 29 was constitutionally valid. The court said that the experiment contained in the Code, judged by the generality of its provisions and not by so-called crudities and inequities that have been pointed out by the petitioners, passes constitutional muster. The court noted with happiness that as a result of the IBC, the flow of funds to the commercial sector had increased exponentially as financial debts were being repaid. This, the court said, had resulted in the fact that the defaulter's paradise is lost. In its place, the economy's rightful position has been regained."

The court also recognized the importance of experimentation in economic matters and said that not allowing this is a grave responsibility which is fraught with serious consequences to the nation. It also noted that since the IBC is an ongoing process, the Central government had set up expert committees that were monitoring its application. The court was appreciative of the fact that the code and subordinate legislation made under it have been suitably amended in a short period in which the court has operated by taking feedback from the committee and all stakeholders.

There is no doubt that the success of the IBC depends on a quick resolution of insolvency. It involves financial lenders taking huge hits. But since a part of the money, usually the principal amount that was lent can be recovered, the lenders can breathe easy. The successful implementation of the IBC is bound to give a fresh lease of life to PSU and NBFC lenders and revive many businesses that would otherwise close down. But in doing all this, thought should also be spared for operational creditors who had kept the businesses running by supplying them with goods and services on credit. If this is not done, then the cost of acquiring goods and services will increase for most companies as suppliers will demand upfront payments before delivery.