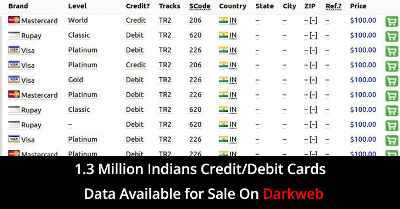 In an alarming piece of news, it has been reported that skimmed data of more than 13 lakh debit and credit cards of Indian nationals is up for sale in the Darkweb marketplace called Joker's Stash. This data can be purchased and used to carry out online transactions. The data thieves skim the details of the users in various ways, the most common being when they use ATMs or POS machines.

It is most distressing that the sellers of the data are claiming to have both track-1 and track-2 data and both together can be easily used to make online transactions. The data dump has been detected by Group-IB, a Singapore-based firm that specializes in detection and prevention of cyber attacks.

That such a huge amount of data has been stolen and put up for sale clearly shows that data thieves and skimmers are operating on a large scale and an organized manner in India. This makes Indian card holders, whose number is rising exponentially as the government pushes for a cashless economy, vulnerable. Anyone of them can find their bank accounts drained or can face huge credit card bills.

The worst thing is that since the actual credit or debit card has not been stolen, the cardholder cannot lodge a complaint either with the issuer or with the police unless a fraudulent transaction is first made on the card. But that one transaction needed to lodge a complaint might drain out the savings of a lifetime. Hence, the cardholder actually does not have a remedy against such data theft without losing a huge amount of money to these fraudsters.

If the government wants a cashless economy, it has to address this issue. If people start losing money to data theft, they will stop making debit or credit cards and start relying on cash as before. It will burden the banking sector and create problems for businesses that depend exclusively on online transactions. Data thieves have become very smart and can clone mobile sim cards to get the OTP sent by issuers as the second or third step verification. Hence, additional, and hopefully foolproof, security is needed to ensure the safety of payment cards.