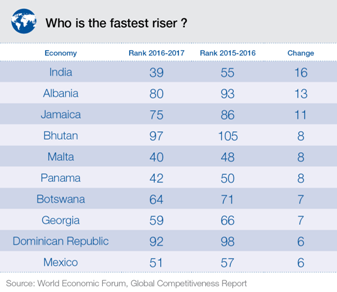 India Should be in Top 10 in Global Competitiveness Index

India Should be in Top 10 in Global Competitiveness Index

Editor-in-Chief of indiacommentary.com. Current Affairs analyst and political commentator. View all posts by this Author
India has risen to the 39th spot on the Global Competitiveness Index compiled by the World Economic Forum (WEF), jumping up 16 places from last year. It had jumped 16 places last year too. In a survey that takes in data from 138 nations, this is a commendable achievement. But given Indias vast resources, legal and bureaucratic machinery, internal connectivity, ports, business acumen, educated workforce and consumer spending prowess, this is still not the ideal situation. Although India has substantially closed the gap with China in two years, being at number 39 should not be a reason to gloat. India should reflect why we are not in the top ten.The Global Competitiveness Index is based on 12 parameters. India needs to do a lot in all the parameters.

The reasons are not far to seek. Widespread corruption has meant that the exploitation of resources have been lopsided. Despite recent efforts to induce transparency in policy decisions, the bureaucracy still swears by red tape. If it can find ways to delay a file, it will. There is no urgency on their part to seek ways to expedite matters. Hence, ease of doing business has not improved perceptibly. Efforts to digitize, despite a clarion call for Digital India, are half-hearted. Without full digitization, there will be no transparency, no innovativeness and no ease of doing business.

Infrastructure development has been bogged down by green clearances and local protests. Land, the biggest hurdle in recent times, has not been made the fulcrum of any new policy on rapid infrastructure and industrial development. While the government took a bold step in enacting a land law, it had to back out in face of opposition protests. Land being a state subject, there has been resistance from the states too. In the absence of a clear policy to acquire land, future competitiveness will always remain in doubt. No entity will invest if it fears that its investments will be blocked by protestors and legal delays.

Investments also remain an area of concern. As The Economic Times has pointed out in an editorial, investments remain sluggish and the current account deficit is now a minuscule decimal point of national income which means that foreign savings are not being utilized to boost domestic investment by the economy.

Further, despite reforms in the banking sector, nothing has been done to rid the banks of the burden of carrying bad debts in the form of sticky loans in their balance sheets. Employment is not rising as the Index of Industrial Production (IIP) has been contracting in successive months. It fell 2.4% in July. Agriculture as percentage of GDP has declined.

True competitiveness will only come through transparency in policy decisions by digitizing processes, cutting down on red tape to facilitate ease of doing business, providing financial muscle to banks, updating labour laws, having a clear land acquisition policy and a stable tax regime. Otherwise Make in India will remain a distant dream. A top ten spot in Global Competitiveness Index can only be achieved if things are made to happen with firm policy decisions.