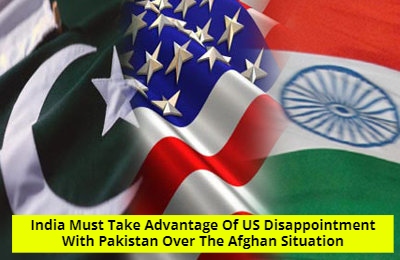 India Must Show Pakistan For The "Arsonist" That It Is

India Must Show Pakistan For The "Arsonist" That It Is

When Pakistan has befriended China going by the maxim that enemy of the enemy is a friend, the US must also realize that friend of an enemy is a potential enemy. That is the new geopolitical maxim. China has emerged as the enemy number one for the US as it shows growing propensity for expansionism and controlling the sea routes and developing new land routes. Pakistan's increasing closeness to China must be viewed with concern by the US as it is likely to be prejudicial to US interests in the long run. Pakistan wants to leverage it security concerns vis-a-vis India by throwing its lot behind China as it thinks that China will handle its concerns while pressing with its own. It also thinks that when things go out of hand, they can together engage India on two fronts, making it difficult for India.

Although the US has recently acknowledged Pakistan's duplicity in Afghanistan and there are indications that it will review its ties with the country, the basic sentiment in the US administration, legislature and influential think tanks is still in favour of Pakistan. It will take time to change this opinion but the Afghan experience and China's influence over Pakistan is sure to dominate US policy on Pakistan in future. The onus will now be on Pakistan to prove its worth. As the young Indian diplomat Sneha Dubey said at the UN, Pakistan is an "arsonist" that is trying to pose as a "firefighter". Pakistan has now got to prove to the US and the western nations that it is indeed a firefighter.

It will not be easy for Pakistan. It continues to be on the FATF grey list for its duplicity on terror financing. It's claimed influence over the Taliban is nowhere on show as the oppressing regime that has captured the nation is not listening to the Pakistani leadership. In fact, Talibani leaders have asked Pakistan not to advise it on government formation. India is providing increasing proof of Pakistani involvement in terror attacks in India and its support to terror groups who target India. This is the time when India must present its case before the world, as it did at the UN last week, and isolate Pakistan as the state that sponsors terror and is a threat to the entire world.